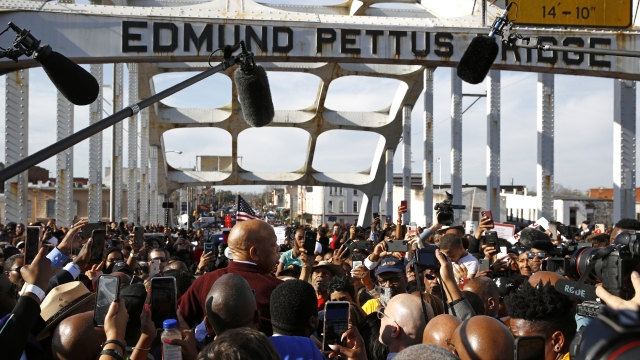 U.S. representative and civil rights icon John Lewis stressed the importance of getting out to vote while participating in the 55th "Bloody Sunday" commemorative march.

Lewis' appearance at the march across the Edmund Pettus Bridge on Sunday came as a surprise to many, following the lawmaker's diagnosis of stage 4 pancreatic cancer in December.

In 1965, Lewis, along with others, were beaten by law enforcement while trying to cross the bridge in Selma, Alabama, during a march for voting rights.

On Twitter, Lewis wrote, "We were beaten, we were tear-gassed. I thought I was going to die on this bridge. But somehow and some way, God almighty helped me here. We cannot give up now. We cannot give in. We must keep the faith, keep our eyes on the prize."

Video from Sunday's march shows Lewis telling the crowd to use their right to vote in the upcoming elections "as a nonviolent instrument or tool to redeem the soul of America."