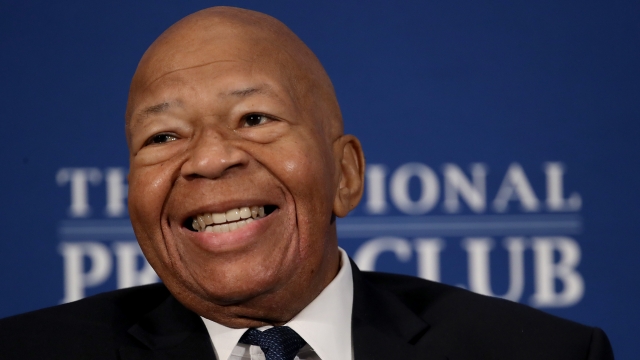 The body of U.S. Rep. Elijah Cummings will lie in state in the National Statuary Hall of the U.S. Capitol on Thursday.

There will be a memorial service for members of Congress, Cummings' family and other guests. The public will have a chance to pay their respects at a public viewing after the service.

Cummings died last week due to complications from longstanding health problems. He was 68.

Relatively few people have ever lain in state. The tradition, which involves displaying a casket in the Capitol Rotunda with a military guard on duty, is largely reserved for government and military officials. The last person lain in state in the Rotunda was President George H.W. Bush in December.

Cummings, a Democrat from Baltimore, was the chairman of the House Oversight and Reform Committee, one of the panels investigating President Donald Trump.

Rep. Stephen Lynch said of Cummings: "Like others on this committee, I had the pleasure and privilege to call Elijah my friend for almost 20 years as we worked on the many issues that have confronted Congress and our country. Mr. Cummings has bequeathed the legacy of compassionate service to those families in our society who still struggle to receive the full promise of the American dream. While he had an abiding faith in the goodness and kindness of humankind, he was firm in his commitment to use his many talents and the power of his position to weigh in on behalf of the disenfranchised and to reduce the suffering that he saw in this world."

Cummings was also the chairman of the Congressional Black Caucus in 2003 and 2004.

He had represented Maryland's 7th Congressional District since 1996.

"My mission, is one that comes out of a vision that was created long, long ago. It is a mission and a vision to empower people," Cummings said after he was sworn into the U.S. House of Representatives on April 25, 1996.

Before that, he served in the Maryland House of Delegates for more than a dozen years and became the state's first black Speaker Pro Tem.

The people of Baltimore got to say their final goodbyes to the late congressman during a public viewing at Morgan State University on Wednesday.

"And he proved that he really does care about democracy, and that's what we need: people of principle."

His funeral will be Friday at New Psalmist Baptist Church in Baltimore.