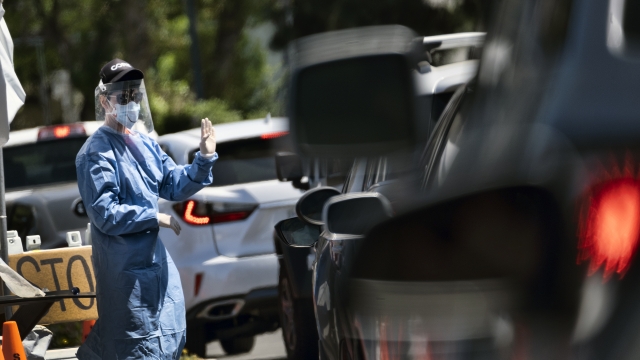 SMS
U.S. Records More Than 50,000 New Daily COVID-19 Cases
By Katherine Biek
By Katherine Biek
July 2, 2020
The new record is thanks in part to large spikes in states like Texas, Florida, and California.
SHOW TRANSCRIPT

Coronavirus cases aren't slowing down in the U.S. Officials announced Wednesday more than 50,000 new infections had been recorded, which is a new single-day record. That's thanks in part to large spikes in states like Texas, Florida, and California.

The surge in cases is prompting some states to roll back reopening measures, while others are once again requiring Americans traveling from hot spot areas to quarantine for two weeks.

But Dr. Scott Gottlieb, the former commissioner of the FDA, said the country's already there. He told CNBC that not enough testing in hot spots means the U.S. is likely only diagnosing one in every 10 infections, meaning, "The 40,000–50,000 infections that we're diagnosing each day right now really represents 400,000–500,000 infections." Although he noted only about half that number is probably symptomatic.

In order to start testing even more Americans, The New York Times reports the Trump administration plans to switch over to what's called pool testing.

Dr. Amesh Adalja: "Instead of taking an individual blood and nasal sample from somebody, you take a whole bunch of them and put them together and run a test on that whole batch and if it's negative all those are clear and if it's positive you go back and individually test those samples to see who is positive."

Adm. Brett Giroir, the assistant secretary for health at the Department of Health and Human Services, told reporters Wednesday, that he expects pool testing will be in place in the U.S. by the end of the summer.