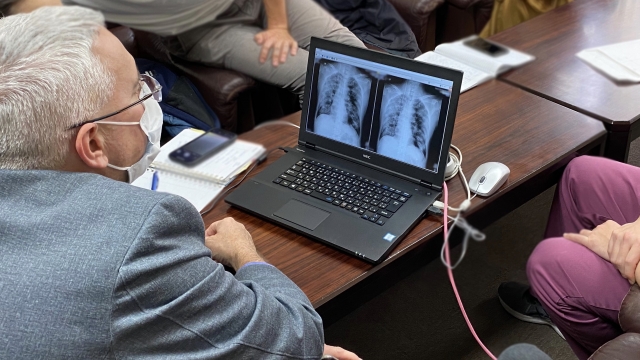 As an officer with the U.S. Public Health Service's Commissioned Corps, Rear Adm. Dr. Richard Childs is used to serving on the front lines of health emergencies.

Childs was a first responder to some of the patients aboard the Diamond Princess cruise ship in Japan. In February, the vessel was a hot spot, with more than 700 passengers testing positive for the coronavirus.

Now, in an interview with Newsy, Childs says he's hopeful based on the results he's seen from some of the most critically ill patients.

"[Japanese doctors] would move them to mechanical ventilators early, before the lungs were severely damaged by the virus. And if they didn't respond to mechanical ventilation, which is often sort of the highest kind of supportive care, you'll enter the intensive care unit. They will take them up to the ultimate level of critical care, this heart bypass machine."

They also treated seven of the most critically ill patients with an experimental drug called Remdesivir.

Remdesivir is supposed to work by stopping the virus from replicating long enough for a patient's immune system to fight back.

"The bottom line is, we don't know if the remdesivir helped them get better. We know for sure the supportive care was absolutely critical in them getting better. Our gut feeling is [the remdesivir] really helped them. We can't say that with any degree of confidence in the absence of a randomized control trial."

That means testing the drug against a placebo.

Remdesivir is currently in six clinical trials internationally. It's also available for severely ill patients via compassionate use. But doctors have to apply to obtain it.

On Saturday, its maker, Gilead Sciences, announced "expanded access" so hospitals or physicians can apply for emergency use of the drug for multiple patients at once.

But remdesivir is still an investigational medicine, meaning there is no definitive evidence it works — or that it's safe.