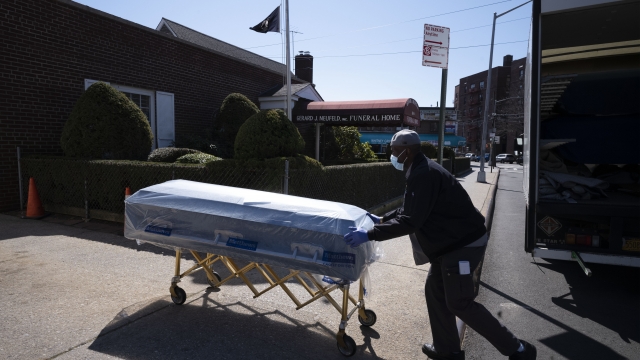 Life expectancy in the U.S. decreased in the first six months of 2020, according to the CDC. That’s no surprise to experts who predicted a combination of COVID-19's physical, financial and mental impact would lead to something like this.

According to the preliminary data, the number of years one can expect to live dropped by one year, from 78.8 years to 77.8 years.

“While that doesn't sound like a whole lot at a population level, this is a huge decline,” said Robert Anderson with the CDC.

In 2006, life expectancy across the board began to tick upward, but the number has never been equal between Black and White Americans. In 2020 that gap widened, with the life expectancy for Black men decreasing by three years.

“You've seen it in the way the vaccine access is rolled out. And now we're seeing it in the ultimate numbers, which is what it's doing to life expectancy for our populations,” said Dr. Stella Safo.

Dr. Stella Safo, a physician specializing in infectious diseases and HIV, says the disparity issue is centuries in the making.

“It's all about social determinants of health, which is just a fancy way to say how we live. And how we lived in this country is one that has been founded on different groups being treated very differently,” said Safo.

A new study from the University of California San Francisco suggests up to 30,000 of the excess deaths across the board were not directly linked to the COVID-19 virus but caused by unemployment.

“We see disproportionate impacts across a range of health outcomes, because they're all artifacts of the same longstanding unjust social structures, things like income inequality and structural racism and the unequal and unfair distribution of power and resources and opportunities,” said Ellicott Matthay with the Department of Epidemiology and Biostatistics University of California, San Francisco.

While the numbers and reasons are still becoming clearer, the societal toll of those excess deaths is almost immeasurable. Like Earnest and Anne Wilkins, who recently passed away from COVID-19 only a day apart. They were married 33 years.

The data from the CDC was only from January to June of last year, early on in the pandemic. And some experts are looking for the lifespan numbers to rebound as the virus is contained and people are vaccinated.