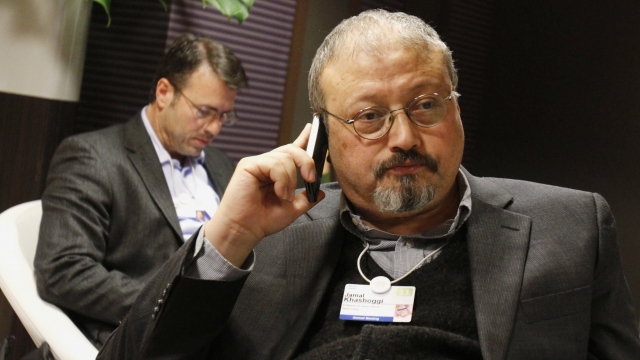 The Biden administration is expected to release a long-awaited report on the killing of Saudi journalist Jamal Khashoggi. Its anticipated conclusion: that Saudi Crown Prince Mohammed bin Salman greenlit the brutal murder in 2018.

"It was obviously deeply painful and frustrating to see our own government blatantly and openly tell the American public that it was protecting Mohammed bin Salman from accountability for this crime," says Sarah Leah Whitson, executive director of Democracy for the Arab World Now.

She leads the human rights organization that Khashoggi co-founded months before he was killed and dismembered inside the Saudi consulate in Istanbul.

"There is a mountain of evidence and information that we're still seeking, both from the Saudi government and the U.S. government, about what happened in this murder," Whitson says.

Former President Trump withheld an intelligence assessment and cast doubt on the crown prince’s involvement, instead forging deeper ties through arms sales and support for Saudi’s war in Yemen:

White House press secretary Jen Psaki told reporters this week President Biden intends to “recalibrate” relations with the Kingdom, speaking with the Saudi king rather than the crown prince, his son and the de facto leader.

And he’s ending military aid for the war in Yemen. But cooling relations could come at a cost:

"This has the potential to impact counterterrorism operations against Iranian-backed militias and insurgent groups throughout the Middle East to include Yemen, Iraq, Syria and Lebanon," says former Senior Director for Counterterrorism in the White House's National Security Council Javed Ali.

Khashoggi, 59, had been living in Virginia in self-exile, writing for The Washington Post. His remains have never been found.