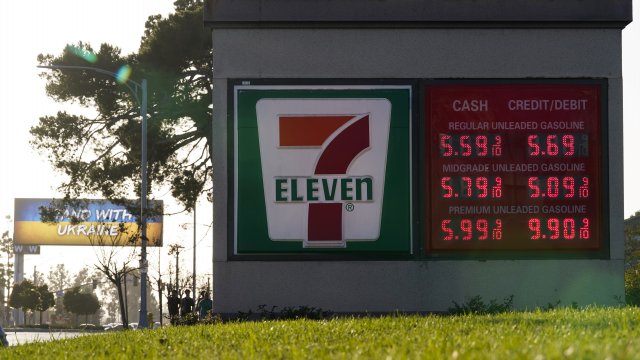 The average price for a gallon of gasoline in the U.S. hit a record $4.17 Tuesday as the country prepares to ban Russian oil imports for its invasion of Ukraine.

The average price rose by 10 cents per gallon in one day, and it's up 55 cents since last week, according to AAA data. The all-time high for average gasoline prices was previously set on July 17, 2008 at $4.10 per gallon.

The amount of gasoline in storage in the U.S. fell last week as demand starts to tick higher with summer approaching.

The increase in gas demand and a reduction in total supply is contributing to rising prices at the pump, but skyrocketing oil prices are playing an increasingly large role.

The price of benchmark U.S. crude jumped 8% Tuesday to more than $129 per barrel.

Americans can expect the current trend at the pump to continue as long as crude prices climb, AAA said.

Rising gas prices come as President Joe Biden has decided to ban Russian oil imports, toughening the toll on Russia's economy in retaliation for its invasion of Ukraine, according to a person familiar with the matter.

The White House said President Biden would announce on Tuesday "actions to continue to hold Russia accountable for its unprovoked and unjustified war on Ukraine."

The U.S. imports about 100,000 barrels a day from Russia, only about 5% of Russia's crude oil exports, according to Rystad Energy. Last year, roughly 8% of U.S. imports of oil and petroleum products came from Russia.

Any curbs on Russian oil exports would send already soaring oil and gasoline prices higher in both the U.S. and Europe and further squeeze consumers, businesses, financial markets and the global economy.

Energy analysts warn that crude oil prices could go as high as $160 or even $200 a barrel if oil sanctions are imposed by the West or if buyers continue shunning Russian crude.

Oil prices that high could send an average gallon of U.S. gasoline past $5 a gallon.