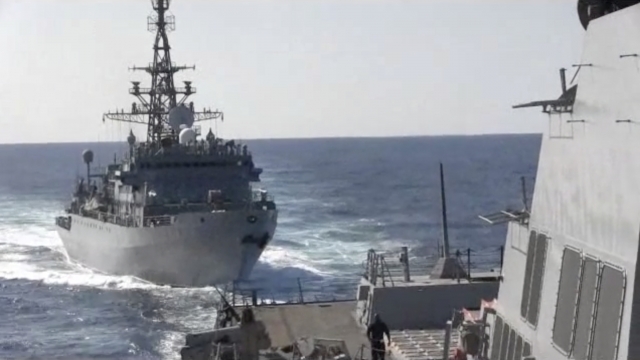 U.S. and Russian warships nearly collided with one another in the North Arabian Sea on Thursday.

The Navy said in a statement on Friday the USS Farragut "was aggressively approached by a Russian Navy ship" while it was "conducting routine operations" in the area. The Navy, which released this video, said its crew "sounded five short blasts" to notify the Russian vessel of a possible collision. According to the statement, the Russian ship at first refused to alter its course, but ultimately yielded "and the two ships opened distance from one another." Defense officials told CNN the Russian warship came as close as 180 feet to the USS Farragut before moving on.

The Russian Defense Ministry, though, blamed the U.S. ship for the incident, saying in a statement it was the U.S. Navy destroyer that "grossly violated international rules ... having made a maneuver to cross [the Russian ship's] course." It also praised its crew for "act(ing) professionally, taking a maneuver that prevented a collision with the intruder vessel."

This is the second near-collision between Russian and American warships in less than a year. The last incident occurred back in June when a U.S. cruiser and a Russian destroyer reportedly came within 50-165 feet of each other in the Philippine Sea.