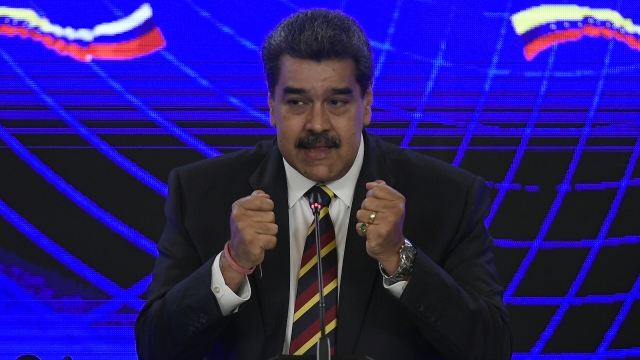 The U.S. is hoping to isolate Russia from its key Latin American ally.

The Russian invasion of Ukraine has opened a crack in the frosty relations between the United States and Venezuela, long considered Russia’s most loyal ally in the western hemisphere.

Signaling a sudden shift in foreign policy, the U.S. sent a delegation to Caracas over the weekend, to talk to the leaders of a country that’s been heavily punished by U.S. sanctions.

Senior Biden administration officials met with President Nicolas Maduro’s government at the Miraflores Palace in Caracas. It's a meeting almost no one would have predicted just a month ago. But the U.S. wants to isolate Russia from this key Latin American ally.

“I believe the US wants Venezuela to return to the good side, to the light side of the force to put it in a way, to take them out of the Russian orbit, offering many incentives,” said  Antero Alvarado, oil and energy expert.

Those incentives could include helping Venezuela to build back its once powerful oil industry, decimated by a combination of U.S. sanctions, corruption, and mismanagement. Venezuela produced nearly 4 million barrels of oil a day two decades ago. Now it produces about a fifth as much.

President Maduro, who has said he supports Russia’s actions in Ukraine, now says he wants to hear what the Biden administration has to offer, announcing he’s ready to re-engage in business if the U.S. lifts the economic sanctions tightened in 2019 over human rights abuses and anti-democratic actions.

“Venezuela is ready. Once we’ve brought output back to basic levels, we will be ready to increase output to one, two, three million barrels if necessary," said Maduro on Tuesday.

Support for the Venezuelan oil industry could help lift Venezuela out of its deep economic crisis, and at the same time,  it could also benefit the U.S. and its allies, who say oil from Russia is now off-limits.

“In terms of volume, it can´t compensate for imports from  Russia, but it sends a clear sign to the market that Venezuela is leaving that stigma of sanctioned country behind, ”  Alvarado said.

But restarting economic and diplomatic relations with the United States puts Venezuela between two realities. On one side, the socialist country’s  longtime political ally, and on the other, the U.S., which has for many years condemned the government of Nicolas Maduro.

Venezuela’s close relationship with Russia began more than two decades ago, when the country elected socialist Hugo Chavez president. Russia now provides Venezuela with everything from military training and equipment, to much of its COVID-19 vaccine supply.

Political analysts say the current political crisis may provide President Biden with an opportunity to reset the U.S. relationship with Venezuela.

“He’s seeing the geopolitical conflict in the long term, with a broader view, knowing that having a key ally of Russia and China so close to Washington, a country that runs counter to western values, is counterproductive,” explains political analyst Ana Milagros Parra.

So far, the U.S. sanctions against Venezuela remain in place. The Venezuelan people continue to suffer from the collapse of their economy. But there may be a glimmer of hope.