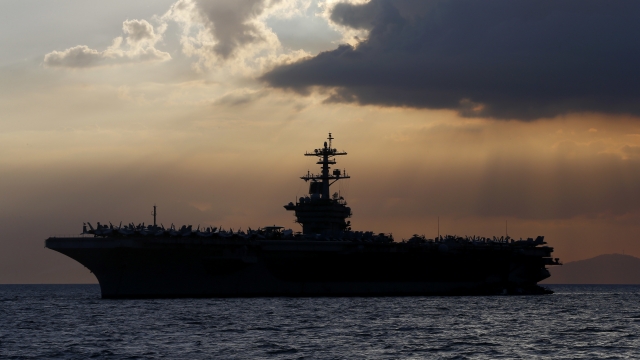 SMS
U.S. Aircraft Carrier In Guam Asks For COVID-19 Help
By Meg Hilling
By Meg Hilling
April 1, 2020
Captain of aircraft carrier docked in Guam is asking for help quarantining sick sailors and is requesting that beds be made available onshore.
SHOW TRANSCRIPT

The captain of the USS Theodore Roosevelt aircraft carrier docked in Guam is calling on the Navy to move sailors off the ship amid an outbreak of the coronavirus onboard.

In a memo obtained by The San Francisco Chronicle, the captain tells Navy officials, "Sailors do not need to die. If we do not act now, we are failing to properly take care of our most trusted asset — our sailors."

The captain is citing serious concerns about the carrier's ability to properly quarantine sick sailors because of how tightly confined it is designed and is asking for beds to be made available onshore.

In an interview with CNN, the Acting Navy Secretary said efforts are underway to move sailors to shore, but are struggling to coordinate with Guam, as the island does not have enough beds available to accommodate them. In addition the secretary notes that any movement of sailors to shore needs to be done in a "methodical way," so that firefighting can be maintained on the ship and the nuclear power plant can be operated.

There are reportedly more than 100 infected sailors aboard the 4,000 crew member carrier as of Tuesday.