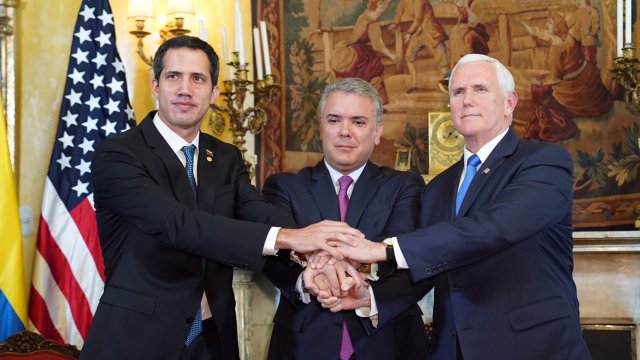 SMS
US-Venezuelan Standoff Untenable, But No Clear Way Forward
By Jake Godin
By Jake Godin
February 27, 2019
As both sides of the Venezuelan crisis entrench themselves in a standoff — the U.S. is running out of options for ways to resolve it.
SHOW TRANSCRIPT

Venezuela is in a crisis — both economically and politically. U.S. attempts to pressure the country’s president, Nicolas Maduro, to step down have yet to work, leaving the two nations deadlocked.

"Their assumption that this momentum in late January would unseat Maduro and things would happen quickly, well they haven't. So the U.S. government is now facing a difficult issue — what happens next."

This is Ivan Briscoe, the Latin American and Caribbean Program Director at International Crisis Group. He's based in Bogotá, Colombia, but recently traveled to Venezuela's capital to speak with politicians.

"The idea that, the U.S. and opposition idea of heaping this great steaming mound of pressure of economic asphyxiation and diplomatic isolation and denunciation in the public realm on top of the government and that somehow it will buckle and break… it has not worked."

The U.S. backs Juan Guaido, who declared himself president in January, months after Maduro won a widely denounced election that took place in May. 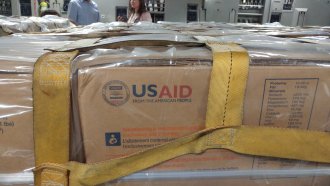 Foreign Aid Could Ignite A Crisis At Venezuelan Border

Maduro refused to step down, so the U.S. laid on new crippling sanctions against Venezuela. Those haven’t worked yet. White House officials say all options are on the table, something that could include military intervention.

That, historically, hasn't worked out in the U.S.'s favor in places like Panama — where the U.S. ousted Noriega — or Iraq, where the U.S. launched a full-scale invasion.

"So we have two types of military intervention that come to mind due to the nature of recent military interventions, one in Panama and the other you might want to say in Iraq, but neither seem to answer the fundamental questions of can they bring a stable transition to Venezuela and in both cases the prospects are pretty dim."

So that leaves the U.S. and Venezuela in a stalemate — one that's not exactly stable. That's something that Briscoe says can't last.

"The status quo is not tenable. This has to be underlined, and that's the results of the decisions which have been taken in the last few months the status quo is not tenable. Why? Because the Venezuelan people will not be able to survive on the thin pickings of the economy these days under sanctions, ruled by a team of officials which does not understand the basics of economic policy."