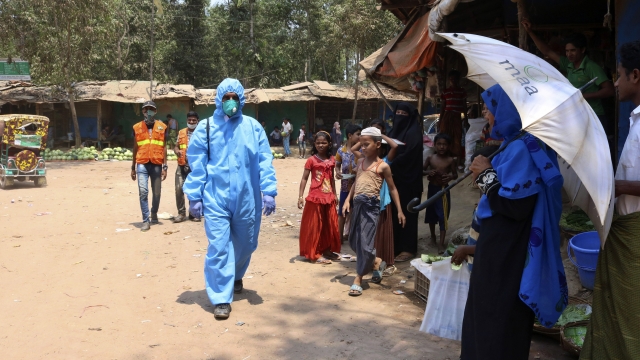 Health officials reported Tuesday that 15,000 Rohingya refugees have been put in quarantine in the Cox's Bazar region of the country. The hope is to stave off a virus spread in impoverished settlements for hundreds of thousands of people.

Officials so far report only some 30 COVID-19 infections there, plus 200 new cases this week in Rohingya camps in neighboring Myanmar.

The U.N. has long considered the Rohingya among the planet's most vulnerable people. That's because, in 2017, the Myanmar military launched campaign that drove out the minority Rohingya in an aggressive what the U.N. called "a textbook example of ethnic cleansing."

A UN spokesman said, "There are serious concerns about the potentially severe impact of the virus in a densely populated refugee settlement sheltering some 860,000 Rohingya refugees. Another 400,000 Bangladeshis live in the surrounding host communities. These populations are considered to be among the most at risk globally in this pandemic."

To date, Bangladesh has reported more than 36,000 COVID-19 cases and 500 deaths. The first cases in the camps were detected in mid-May.

Paul Dillon of the International Organization for Migration says the group is racing to set up acute respiratory isolation treatment beds and upgrade 35 triage centers in the camps.

But this refugee, Mohammed Jaber, told The Associated Press that he fears little may work if COVID-19 spreads there. He says some shacks have a dozen residents and five people to a bed. So he asks, "How can we maintain distance in this state?"