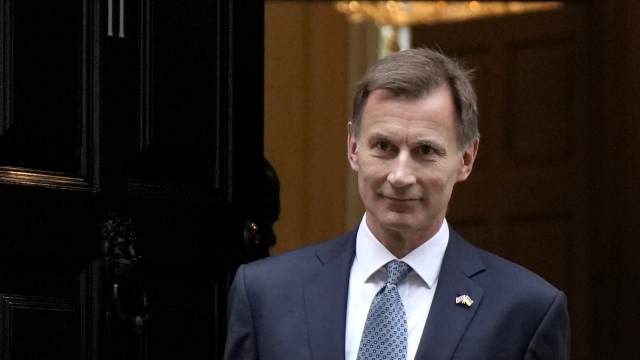 Millions of British people face higher taxes and steeper energy bills after the government announced an emergency budget on Thursday aimed at restoring the country’s economic credibility and shoring up its battered public finances.

Treasury chief Jeremy Hunt promised to protect the most vulnerable, including pensioners and those on low incomes, and increase funding for core public services like health and education, even as he imposed $65 billion in tax increases and spending cuts.

Hunt acknowledged he was delivering “a substantial tax increase,” with measures that include higher taxes on top earners and levies on some businesses.

At the same time, Hunt pledged to spend billions of dollars to help consumers pay soaring energy bills, increase welfare benefits and pensions in line with inflation, and maintain investment in energy and infrastructure projects.

Saying the U.K. faces “unprecedented global headwinds,” Hunt unveiled the package that he said would help tame inflation and rein in public debt while bolstering the economy.

Facing pressure to tap huge profits of oil and gas companies to help fund support for struggling Britons, the government raised its windfall tax from 25% to 35% from January 2024 to March 2028.

Electricity generators also will have to pay a new temporary levy of 45%. Hunt said the taxes combined would raise $16.5 billion next year.

Hunt promised to protect public spending on key areas such as health and education as well as investment in energy and infrastructure projects. But he delayed key decisions, such as whether to stick to the previous government’s promise to increase defense spending to 3% of economic output.

Pensioners and people on welfare benefits will see their payments increase in line with inflation, while millions of workers on the minimum wage will get a 9.7% increase in April, Hunt said.

Millions of households face higher energy bills, however, when a price cap goes up from $2,900 a year for the average household to more than $3,500 in April.

Hunt pointed to pain ahead. He said the independent Office for Budget Responsibility said inflation would reach 9.1% this year and 7.4% next year but would start to fall sharply from mid-2023. He said the office judged that the U.K. is already in a recession.

The Bank of England boosted its key rate by three-quarters of a percentage point, to 3%, after consumer price inflation soared to a 40-year high.

The economy shrank 0.2% between July and September, according to official statistics, and the Bank of England has predicted a recession that could last as long as two years.

Two quarters of economic contraction is a long-held informal definition of recession, and the one the U.K. uses. The country doesn’t have an independent body that declares recessions like in the United States and Europe, which use more detailed data to make decisions, such as rising unemployment and job losses. The job market is still strong in all these countries.

With that backdrop, the government will struggle to meet all of the competing demands, said Torsten Bell, chief executive of the Resolution Foundation, a think tank that seeks to improve the living standards of low- and middle-income people.

“The uncomfortable reality is that unless global energy price rises reverse, we will remain poorer as a country than we’d hoped to be,” Bell wrote this week.

The government is facing demands from nurses, police officers, border guards and civil servants who are all clamoring for pay increases after inflation accelerated to a 41-year high of 11.1% in October. Welfare recipients and pensioners also are looking for higher payments, and low-income families are calling for an expansion of the free school lunch program.

But resources are limited, with Sunak facing a shortfall of at least $47 billion.

The budget comes against a grim backdrop, with the war in Ukraine, aftershocks from the COVID-19 pandemic and the economic strains of Britain’s exit from the European Union all weighing on the U.K. economy.

Hunt and Sunak have reversed most of Truss’ policies, while pledging that the government will pay its bills and start reducing debts built up over the past 15 years.

U.K. public debt ballooned to almost 83% of economic output in 2017 from less than 36% in 2007 as the government bailed out banks and struggled to bolster the economy. A decade of budget tightening had started to reduce the burden when the COVID-19 pandemic and war in Ukraine pushed debt to 98% of gross domestic product. That is the highest since 1963, when Britain was still recovering from World War II.

But some economists caution against moving too fast to reduce government debt at a time when rising food, energy and housing costs are set to wipe out the savings of a fifth of British households.

Among those who need help the most are Magdelena Prosenic, a single mom who described her struggles feeding her two young children as she waited in line Wednesday at a community food pantry in south London.

For about $6, people can buy 20 items of fresh fruit, vegetables and essential items like canned beans and pasta. But items like eggs, which have shot up in price, are in high demand, and there’s only enough for those who come early.

“We are on benefits, but it’s hard to provide for two children without help,” said Prosenic, hoping to get food for her baby and 3-year-old.

Anna Sjovorr-Packham, who runs the pantry, said the numbers of families buying food from them is creeping up “slowly but steadily.” And the cold winter months are coming, when families need to spend more on heating.

“I think there was once an idea that people who access food pantries may need the service as a last-case scenario — there may be a stigma about the type of person,” she said. “But now the pantries are definitely utilized by everybody.”