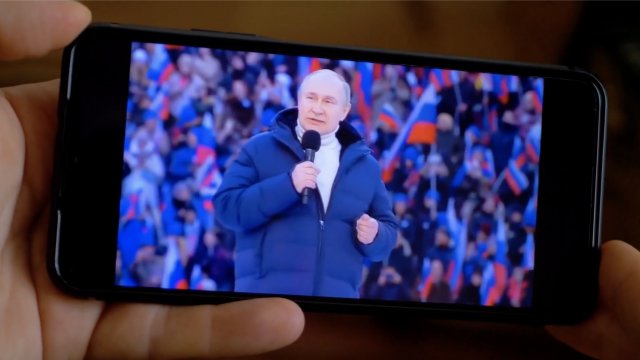 Outside Ukraine, there is a raging war of information as Russian propaganda inspires pro-Russian protests in European countries.

Counteracting Russian disinformation is a priority for governments, and it's something the U.K. has been praised for arranging.

Its Ministry of Defense, or M. O. D., has been releasing regular intelligence updates used by independent military experts, journalists and analysts to decipher the truth about what's happening on the ground.

This is a war being fought on two fronts, both on the ground in Ukraine, and outside of Ukraine in information.

When it comes to counteracting Russian propaganda, the British government has been praised even by those who were once critical of the Ministry of Defense.

"I've been hugely critical of the M.O.D. in the past about being useless at this sort of thing and hopeless at PR, but I think that that they're beginning to crack it," Stuart Crawford said.

Crawford is a military expert and former Lieutenant Colonel in the British army.

"Russia has tried to interfere in... various other elections around the world, so, I think it's very important that in many ways that the U. K. and... anybody in government try to keep the moral high ground," Crawford said.

In Russia, the BBC is broadcasting on shortwave radio after the government donated 5 million pounds towards a special BBC World Service, as the Russian Federation pumps out falsehoods to its population.

"They've become experts in disinformation across the internet," said Andrew Bridgen, a U.K. Parliament member. "They're well known for it. It's got a huge reach. That's how a lot of people receive their news and updates now, and it has to be countered. It's important that we play our part in doing that, getting the truth out to people. At the end of the day, the truth is the truth if no one believes it, and a lie is still a lie if everyone believes it."

Social media companies have scrambled to respond to Russian disinformation. On Thursday, Russian Foreign Minister Sergei Lavrov reacted to Twitter restrictions on Russia's Ministry of Foreign Affairs, saying all it was doing was telling the truth as countries and corporations rushed to respond to false claims and conspiracies.