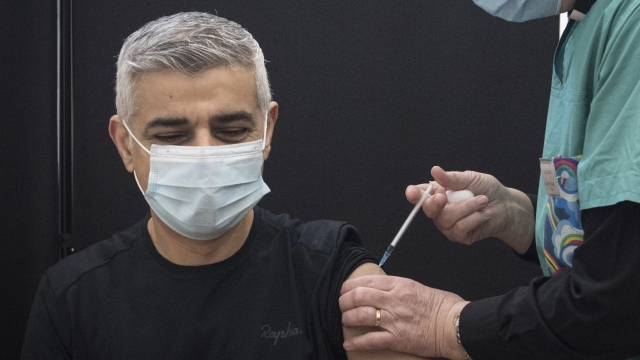 SMS
U.K. Aims To Offer All Adults A COVID Vaccine By July
By Bailey Vogt
By Bailey Vogt
February 21, 2021
British citizens over 50 and with an underlying health condition should have access to a shot by April 15th.
SHOW TRANSCRIPT

The U.K. is aiming to offer all adults their first dose of the coronavirus vaccine by the end of July.

"We now think that we have the supplies to be able to do that. We can see the [National Health Service] and all of those partners and all of those working on this have been able to deliver jabs at about half a million a day."

That's an improvement over the original target of September. British Health Secretary Matt Hancock added citizens over 50 and with an underlying health condition should have access to a shot even faster....by April 15th.

The U.K. matched the goal of President Biden — who said all Americans should have access to a vaccine by July.

He said that's when the 600 million doses, which would cover most of the U.S. population's two shots, would be distributed.

"July 29th is the expected date, but that could change. ... I believe we'll be approaching normalcy by the end of this year and God willing, this Christmas will be different than last. But I can't make that commitment to you."

The President also urged Congress to pass his $1.9 trillion American Rescue Plan— which would respond to both the pandemic and its economic fallout.