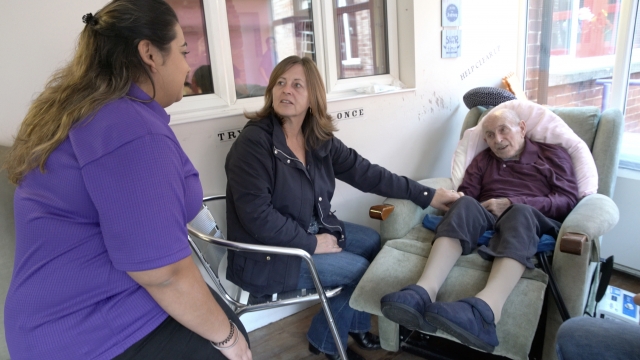 Paula Miller says her family was lucky to find an adult care home for their father that was close enough to visit regularly.

Miller told Newsy, "When he first came out of the hospital, the nearest one that they suggested was probably about an hour and 30 minutes from here. Which, of course you go any length any distance from your family, but having it here in docking is it's it's maybe 10 minutes from my brother's home. So it's, it's wonderful."

But now the facility's future — as well as the future of similar homes throughout the UK — is at risk thanks to severe staffing shortages caused in part by Brexit.

Miller said, "I don't really keep up with the Brexit situation, but I'm just hoping and praying it doesn't affect the care here. Because if this place closes I don't know what local people will do."

Adult social care differs from the rest of the U.K.'s healthcare system; it relies on private companies rather than a government-run system like the NHS. The sector depends on E.U. nationals for a sizeable chunk of its workforce; about 9 percent of England's adult social care workers hail from E.U. countries, compared to 5.5 percent in the NHS.

The E.U.'s freedom of movement laws previously made it easier for care homes to recruit EU nationals; but those regulations won't apply to the U.K. after Brexit.

Raj Sehgal is the Managing Director for U.K. social care company Armscare. The company provides housing and care services to elderly patients, as well as those suffering from dementia or Alzheimer's.

Sehgal says Brexit's uncertainty has already put that labor pool in jeopardy; E.U. workers are leaving the country or choosing not to emigrate to the U.K.

Sehgal told Newsy: "What we've found that since the referendum three years ago, the number of applicants that we're getting from Europe has dwindled to virtually nothing."

"There will be care facilities that will shut down and close and I'm aware of local care homes here that are suffering with quality issues that are on the verge of closing down because they haven't got the right caliber and quality of staff simply because they're not available."

Sehgal told Newsy his care home used to employ eight or nine E.U. nationals: now it only employs one. Fewer staff means less ability to care for patients, which can lead to care homes having to turn more people away.

Retaining social workers was a difficult task even before Brexit. Skills for Care, an adult social care charity, notes the sector has a 30.8 percent turnover rate over the last twelve months, with 122,000 job vacancies across England.

U.K. Prime Minister Boris Johnson has floated the idea of a points-based immigration system for E.U. nationals arriving in the country after Brexit. That kind of system would privilege workers with higher levels of education, wealth and language proficiency — but not necessarily the temporary workers that staff adult social care homes.