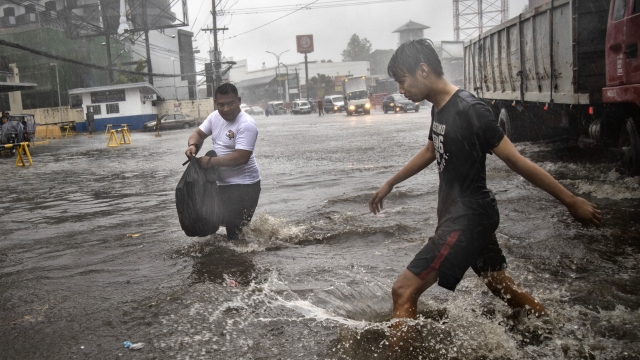 SMS
Typhoon Forces Mass Evacuations In The Philippines
By Meg Hilling
By Meg Hilling
December 3, 2019
Manila's international airport was shut down and school was canceled throughout the country as Typhoon Kammuri ravaged the islands.
SHOW TRANSCRIPT

Streets are flooded and power lines are down in the Philippines following the arrival of Typhoon Kammuri Tuesday.

Hundreds of thousands of residents throughout the islands hunkered down in evacuation centers as winds reaching more than 130 miles per hour ripped roofs off homes and scattered debris.

Known locally as typhoon Tisoy, the severe weather conditions forced Manila's international airport to shut down for about 12 hours.

The Philippines is currently hosting the Southeast Asian Games and had to cancel or postpone several outdoor events because of the typhoon and its aftermath.