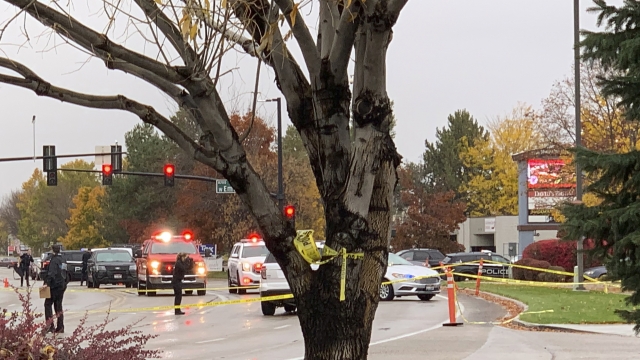 A suspect is in custody after two people were killed and four injured — including a police officer — in a shooting at a shopping mall Monday in Boise, Idaho, police said.

At a news conference, authorities said officers exchanged gunfire with the suspect. The majority of the mall has been cleared but police were still looking for any additional victims.

Police didn't release any other information, saying the investigation was ongoing.

Police are asking people to avoid the area. Police also said they were notifying the families of those involved.

The Boise Towne Square shopping mall is located in Idaho's largest city and is the city's largest mall.

Police were interviewing dozens of people outside the entrance to Macy's, one of five large department stores at the mall that has 153 stores in all.

Police are also investigating what appears to be another crime scene at a restaurant near the mall.

Cheri Gypin, of Boise, was in the mall with a friend where they walk for an hour three or four times a week. She said she heard several large bangs, but thought something had fallen from the ceiling. Then about 60 people, including families pushing strollers, came running at them, some of them shouting that there was an active shooter.

"My friend was trying to process it," said Gypin, 60. "I just looked at her and said, 'We've got to run.' So we just ran and kept running until we got to the outer perimeter of the parking lot."

They made their way back to their car, where police told the crowd of people who had fled the mall to leave the parking area.