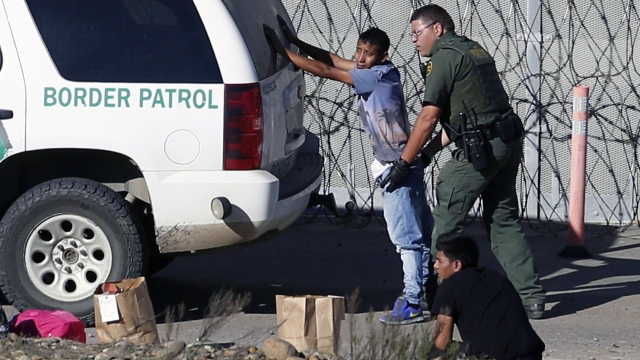 SMS
Why Are So Many Migrant Kids Trekking Alone To The U.S. Border?
By Ben Schamisso
By Ben Schamisso
March 10, 2021
We caught up with a man who traveled 2,000 miles to the U.S. as a 15-year-old to escape hunger and violence in Honduras.
SHOW TRANSCRIPT

"It took me one month to travel from Honduras to the U.S. Most of that time I spend in Mexico on top of a cargo train, begging for food."

When he was only 15, Elvis Garcia Callejas traveled 2,000 miles to the U.S. to flee poverty and gang violence in Honduras.

He knew the trip north would be extremely dangerous but says staying home was not an option.

"My father was an alcoholic, and he was never present in my life. My mom made about five dollars a day. And with the money, she had to support five boys," Garcia Callejas recalled.

Garcia Callejas' American dream is shared by many Central Americans.

"Since I was a kid, I always carried the stories of the United States being a safer country," Garcia Callejas said.

And the trend has only accelerated in recent months.

Migrants from Mexico and Central America — including unaccompanied minors — are crossing the U.S. border in record numbers.

"They had two hurricanes back to back. They've suffered immensely economically because of COVID. And that was on top of situations that were already rather desperate," said Theresa Cardinal Brown, a former Homeland Security official who's now director of immigration and cross-border policy at the Bipartisan Policy Center.

Many Republicans say President Biden's border policies are "weak" and igniting "a crisis at the border."

The Biden administration reversed Trump policies such as border expulsions of unaccompanied minors and the Remain in Mexico program, which required migrants to wait outside the country for their asylum hearings.

The reversals help explain the increase in crossings. But experts say that's only part of the story.

"I think that the push factors, so to speak, are far more influential in the flow of individuals to our border than anything we do in this country. And the reality is that the situation in Central America is dire," said John Sandweg, a former ICE acting director.

The Biden administration wants to invest in Central America to tackle root causes of migration: poverty, violence and corruption. But that's a long-term investment that may not pay off for years.

In the meantime, the White House can expand capacities at the border and create other legal avenues and asylum destinations for migrants.

"Work with the region. Are there other places that migrants could go for safety? If a lot of them are coming from work and we need workers, why can't we expand our temporary visas available for them and have them come legally?" Cardinal Brown said.

As for Garcia Callejas, he won his case and is now a U.S. citizen.

At 31, he has also achieved his dream of lifting his Honduran family out of poverty — preventing them from risking their own lives migrating to the U.S.