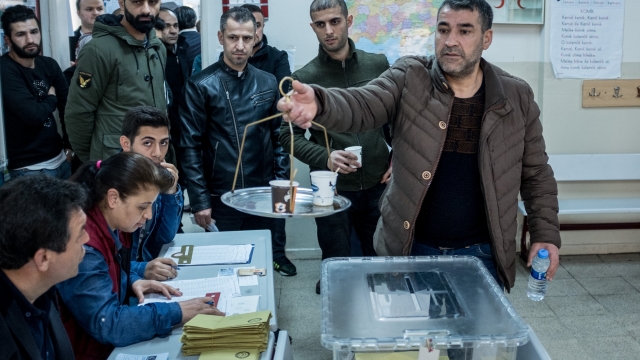 SMS
Turkey's Ruling Party Demands New Election For Mayor In Istanbul
By Katie Cammarata
By Katie Cammarata
April 9, 2019
While Erdogan's party got majority of the votes across the nation in the local elections, losing Istanbul would be a major setback for him.
SHOW TRANSCRIPT

Turkey's ruling party is demanding a new election for mayor in Istanbul.

Erdogan's party — otherwise known as AKP — challenged the results of the election after they showed a slim victory for the opposition — less than 0.3 percent of the some 9 million votes cast. An opposition mayoral candidate also won after a close election in Turkey's capital Ankara. That result has been finalized.

One top AKP official previously told reporters he filed appeals to contest the results from all of Istanbul's districts due to voting irregularities. AKP demanded a partial recount of the ballots, but it didn't change the results. The party then asked for a full recount, but the country's High Election Council rejected the request. Now, the council has to at least consider AKP's demand for a new election.

While Erdogan's party got majority of the votes across the nation in the local elections, losing both Istanbul and Ankara would be a major setback for him.

Erdogan has been in power for 16 years now, and his party has dominated Turkey's elections for even longer. But the country's economy has continued to deteriorate under his policies, and Erdogan's popularity is suffering.