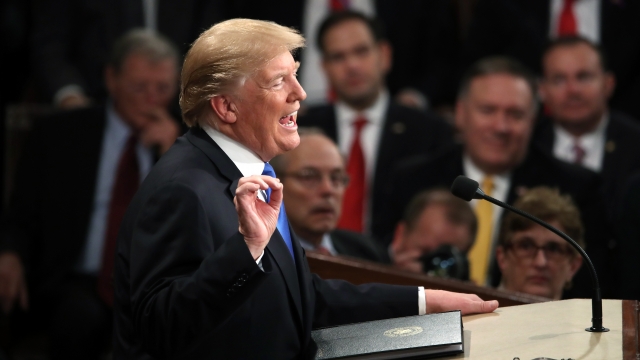 SMS
Trump Says He Won't Give State Of The Union Until Government Reopens
By Katherine Biek
By Katherine Biek
January 24, 2019
His announcement came after House Speaker Nancy Pelosi uninvited him from giving his speech in the House Chamber next week.
SHOW TRANSCRIPT

President Donald Trump announced late Wednesday that he won't give his State of the Union address until after the partial government shutdown is over.

It was one of the president's only options after House Speaker Nancy Pelosi uninvited him earlier in the day from giving his speech in the House Chamber next week.

In her letter Wednesday, Pelosi told the president, "I look forward to welcoming you to the House on a mutually agreeable date for this address when [the] government has been opened."

Pelosi first suggested earlier this month to President Trump that he delay giving his address. She cited "security concerns" because of the shutdown, which is currently affecting the Department of Homeland Security.

But after President Trump still vowed to show up on Jan. 29 and give his speech, Pelosi told him the House wouldn't vote on the resolution that both chambers must pass in order to allow him to give the State of the Union address.

Although the Trump administration reportedly considered holding his speech at an alternate venue, the president later tweeted that he ultimately decided against that "because there is no venue that can compete with the history, tradition and importance of the House Chamber."

Pelosi responded to Trump's announcement late Wednesday, saying she hopes he'll throw his support behind the House's efforts to end the shutdown.