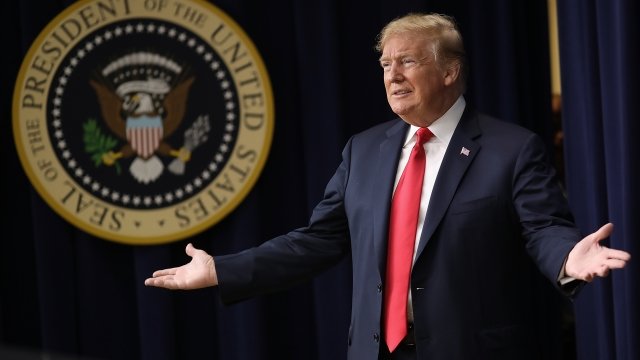 SMS
Trump Wants To Wait Until After Midterms To Sign Any NAFTA Deal
By Ethan Weston
By Ethan Weston
July 1, 2018
Canada, Mexico and the U.S. have been renegotiating NAFTA since August 2017.
SHOW TRANSCRIPT

President Donald Trump said Sunday he wants to wait until after the midterm elections to sign a new NAFTA deal.

The president told Fox News he is "not happy" with a revised NAFTA deal that the U.S. has been working out with Canada and Mexico.

Trade tensions are already high between these nations. The U.S. imposed import tariffs on Canadian and Mexican steel and aluminum. The president's comments come on the same day that Canada imposed over $12 billion in tariffs on U.S. goods in retaliation for the metal tariffs.

President Trump has railed against trade deals, including NAFTA, on a number of occasions and has said the agreement is the "single worst deal ever approved." Canada, Mexico and the U.S. began renegotiating NAFTA in August 2017.