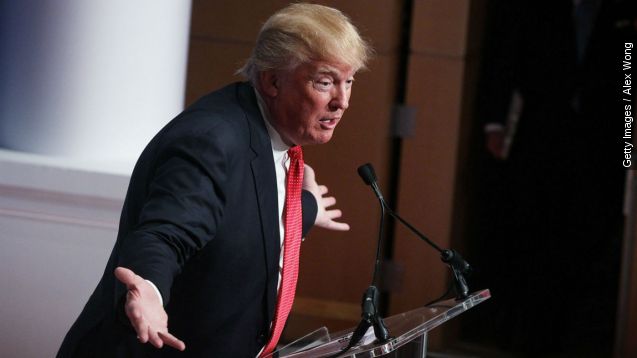 Donald Trump wants to stop Muslim immigration into the U.S. until "representatives can figure out what is going on." Meanwhile, we're trying to figure out what's going on with Trump's sources.

For starters, Trump's website says Pew Research supports his claim that many Muslims hate Americans. Only problem, he didn't link to this information and the most recent data Pew published on Islam doesn't support that at all. (Video via Fox News)

Trump actually linked to the Center for Security Policy to support his claim. It concluded "25% of those polled agreed that violence against Americans here in the United States is justified as a part of the global jihad." But that non-profit is a bit controversial to begin with.

According to the Center for American Progress it publishes "a steady stream of reports mischaracterizing Islam and warnings about the dangers of Islam and American Muslims."

The CSP poll was conducted online using a survey. But the questions they ask are somewhat confusing since it doesn't ask about personal feelings and could be asking how others justify jihad, for example.

The Washington Post notes the survey conducted by CSP is of U.S. Muslims, so it didn't even poll the people Trump hopes to stop from immigrating into the country.

CSP's founder and president, Frank Gaffney, is known for his conspiracy theory that a Hilary Clinton staffer is an agent of the Muslim Brotherhood. Southern Poverty Law Center lists Gaffney as an anti-Muslim extremist. (Video via Fox News)