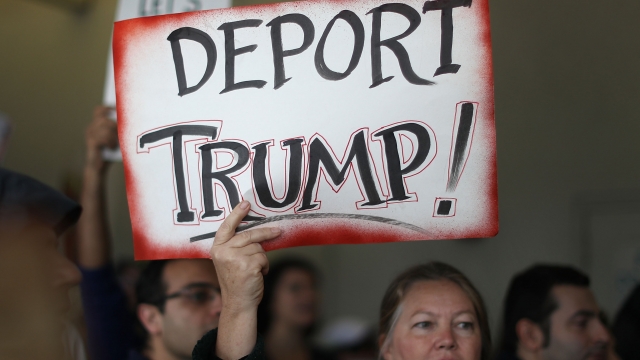 SMS
How Trump Wants To Make It Easier To Deport People Quickly
By Kate Grumke
By Kate Grumke
March 8, 2017
He wants to expand "expedited removal," a form of deportation that doesn't involve a judge.
SHOW TRANSCRIPT

The U.S. can deport people without even involving a judge. It's called expedited removal. And President Trump wants to take it to a new level.

The Obama administration used this a lot, but only for immigrants who had arrived within the last two weeks and were arrested in "the border zone," which is already pretty wide. Trump wants expedited removal to be an option everywhere — not just near the border. And he wants to apply it for people who arrived in the past two years.

In 1996, Congress passed immigration reform that opened the door for expedited removal. It's a process that means even low-level immigration officers can order deportations of some non-citizens without any sort of official trial.

The officer essentially serves as both the prosecutor and judge and operates with virtually unchecked authority.

But expedited removal is not legally allowed to be used against asylum seekers.

Under President Obama in 2013, these types of removals made up about 44 percent of all removals.

Now, a big question is, how will undocumented immigrants even prove they've been in the country for two years? Expedited removal can happen in less than 24 hours. Some advocates, including lawyers we spoke with at the American Immigration Lawyers Association, are wondering if those immigrants will have to carry around a suitcase of receipts or other records.

We'll find out as the Trump administration starts to actually put these policies in place.