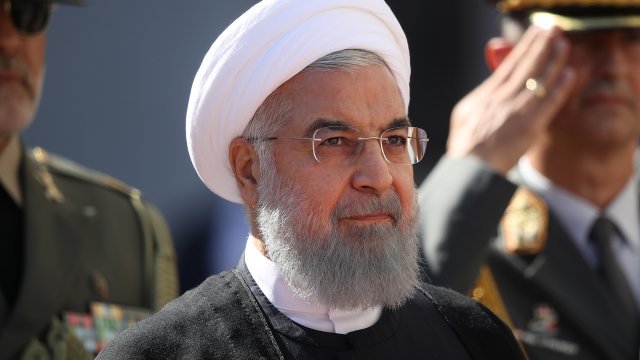 President Trump's all-caps Iran tweet reflects his administration's turn away from diplomatic engagement with the country.

If you're wondering why President Donald Trump is sending all-caps Twitter threats to Iranian President Hassan Rouhani this week, look no further than the 2015 international deal on Iran's nuclear program.

That deal was supposed to constrain Iran's nuclear weapons program in exchange for sanctions relief — until Trump withdrew the U.S. from it in May. He complained the agreement was one-sided and did not stop Iran from eventually developing a nuclear weapon.

Iran's already facing steep economic pressures back home; fresh U.S. sanctions are likely to exacerbate the problem. Unsurprisingly, Iranian leaders have leveled harsh criticisms at Trump's decision to leave the deal. Rouhani warned Trump not to "play with the lion's tail" this week, which may have sparked Trump's heated tweet.

The Trump administration is hoping that economic pressure forces Iran back to the negotiating table, leading to another deal that's more in line with Trump's priorities on Iran.

House Members Look To Get Data On Hezbollah

Members of Congress are hoping to get concrete data about Hezbollah's arsenal in order to figure out how to approach the issues in the Middle East.

U.S. Secretary of State Mike Pompeo said, "As President Trump has said, we’re willing to talk with the regime in Iran, but relief from American pressure will come only when we see tangible, demonstrated and sustained shifts in Tehran's policies."

But so far, Iran's leaders haven't budged. The country has signaled it's preparing to restart nuclear enrichment again if the nuclear deal falls completely apart.

European leaders have pledged to salvage the Iran deal and continue trading with Iran, but several high-profile EU companies have already pulled out of contracts in Iran rather than risk running afoul of U.S. sanctions.

In lieu of better relations with the West, Iran is portraying the U.S. as an aggressive bully seeking to disrupt the country's government. And Trump seems happy to play the part.

Still, there's some hope yet for Iran-U.S. relations. After all, the last dictator Trump threatened ended up getting a high-profile summit with the president.