This Trump Tweet Has People Worrying About A Consumer Finance Bureau 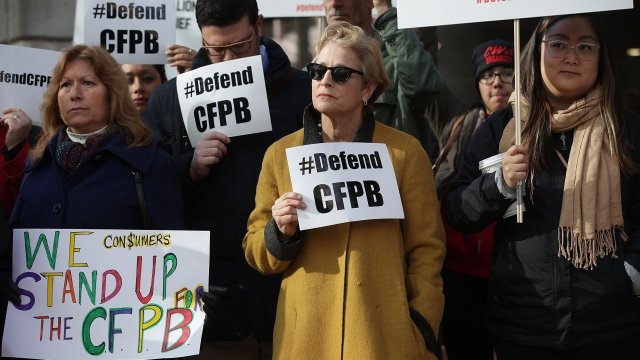 A recent tweet from President Donald Trump is worrying some people about the independence of the Consumer Financial Protection Bureau.

The issue started on Thursday, when Reuters reported that the head of the CFPB was reviewing the penalties for Wells Fargo's alleged lending abuse. Trump tweeted on Friday that the fines and penalties wouldn't be dropped, but legal experts say the president doesn't have the authority to weigh in.

The CFPB is meant to be an independent agency. But Trump appointed Mick Mulvaney, who also runs the White House's Office of Management and Budget, as acting director. That's led to concerns that the CFPB is losing its autonomy.

Wells Fargo Takes Back $75 Million From Former Executives For Scandal

The board of directors has blamed two executives for its fake accounts scandal last year.

A group of financial reform advocates, who have filed a lawsuit to block Mulvaney's appointment, said Trump's tweets make it clear the White House wants to intervene in the agency's business.