Trump To Meet With South Korea's President In April 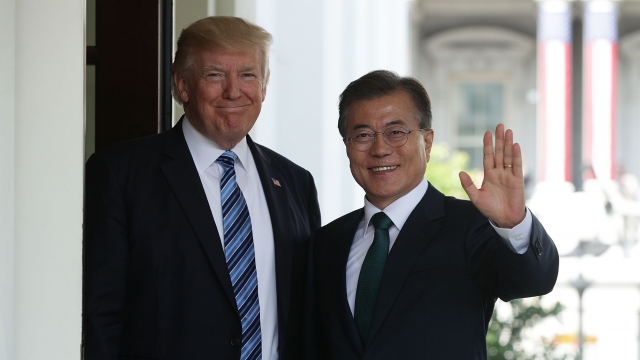 SMS
Trump To Meet With South Korea's President In April

By Katherine Biek
March 29, 2019
The two leaders are expected to discuss bilateral matters and developments with North Korea.
SHOW TRANSCRIPT

President Donald Trump will sit down with his South Korean counterpart in Washington, D.C., next month.

The White House announced late Thursday that President Trump and President Moon Jae-in are scheduled to meet April 11. The two are expected to discuss bilateral matters and developments with North Korea.

President Trump most recently met with North Korean leader Kim Jong-un in February. But that summit ended with the two men unable to agree on steps toward denuclearization and lifting U.S. sanctions.

Since then, North Korea's said it may suspend denculearization talks with the U.S. and resume nuclear testing unless the U.S. changes its "political calculation."

North Korea later abruptly pulled its staff from a joint liaison office with South Korea, only to reverse the decision three days later.