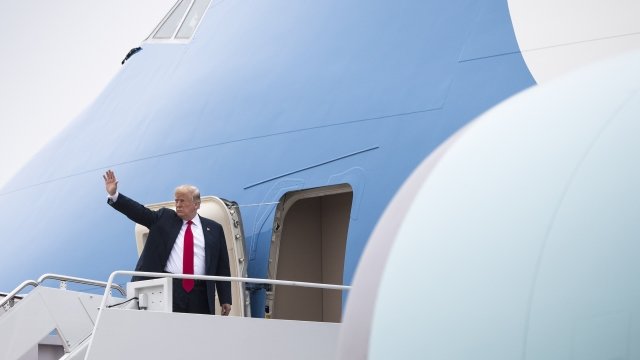 SMS
Trump To Leave The G7 Summit Early
By Katherine Biek
By Katherine Biek
June 8, 2018
The White House announced the president will leave the summit around mid-morning on Saturday after he attends a meeting on women's empowerment.
SHOW TRANSCRIPT

President Donald Trump is going to cut short his time at this week's annual G7 summit in Canada.

The White House announced Trump will leave the summit around mid-morning on Saturday after he attends a meeting on women's empowerment.

An aide will step in for him for the remainder of the summit, which includes sessions on climate change, clean energy and oceans.

On Saturday, Trump will travel directly to Singapore, where he's scheduled to meet with North Korea's leader Kim Jong-un on Tuesday.

The announcement on Trump's early departure from the G7 summit came on the same day the president called out French President Emmanuel Macron and Canadian Prime Minister Justin Trudeau on Twitter. Both Macron and Trudeau have spoken out against U.S. tariffs on steel and aluminum imports.