Trump And Tillerson Take Different Tones On Dealing With Qatar 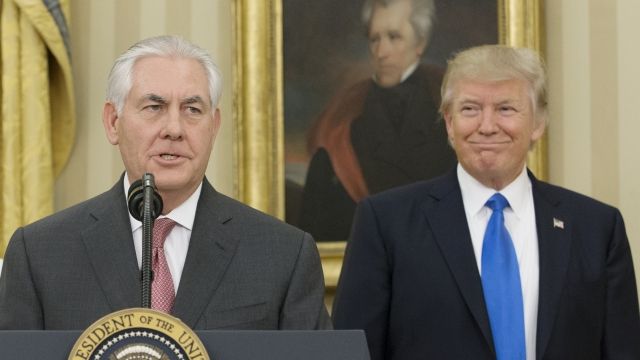 It appears Secretary of State Rex Tillerson and President Donald Trump have different views on how to deal with the situation in Qatar.

In a statement, Saudi Arabia accused Qatar of "destabilizing the region" by, it claims, backing terrorist groups like Al-Qaeda and ISIS. The blockade is a big deal for people living in Qatar, too, as the country's food supply is now in jeopardy.

On Friday, Tillerson called on Saudia Arabia, which is leading the blockade, to ease off. He also encouraged the other countries involved to mend the rift, citing reported humanitarian hardship in Qatar.

But in a press conference shortly after, Trump took a noticeably harsher tone. He called Qatar a "funder of terrorism" and applauded the Saudi-led effort to cut off resources.

An anonymous White House official told The Washington Post that, while Trump and Tillerson took different tones, the president isn't against easing the blockade.

And both have denounced the funding of terrorism and have asked Qatar to do more to cut ties with radical groups in the region.