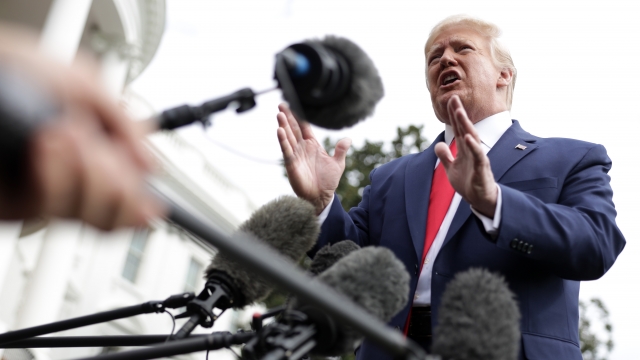 SMS
White House Directs Agencies To End Major Newspaper Subscriptions
By Adam Elrashidi
By Adam Elrashidi
October 25, 2019
The White House says it's a cost-cutting tactic, but President Trump has not hidden his disdain for The New York Times and Washington Post.
SHOW TRANSCRIPT

President Trump is ramping up his ongoing war against so-called "fake news." On Thursday, the administration urged federal agencies to end their subscriptions to The New York Times and The Washington Post.

The White House told The Wall Street Journal the plan was a cost-saving measure that would save quote "hundreds of thousands of taxpayer dollars." But the president has made no secret of his disdain for both outlets over what he has called biased or unfair coverage of his administration and family.

Earlier this week, the president mentioned the Times in an interview with Fox News host Sean Hannity.

But President Trump's statement about the Times after his election in 2016 isn't entirely accurate. The outlet's parent company said at the time that while it had experienced a loss in print subscriptions during the third quarter of 2016, that was offset by 116,000 new digital-only subscriptions. A New York Times spokesperson told Newsy the paper currently has 4.7 million total subscriptions, of which 3.8 million are digital-only.

And as for the "apology" the president mentioned? In a letter to its readers days after the 2016 election, the Times' leadership wrote, "We believe we reported on both candidates fairly during the presidential campaign," and noted that readers could continue to count on the paper for fair coverage of the new administration.

Speaking to the Wall Street Journal following Thursday's announcement, White House Correspondents' Association President Jonathan Karl said journalists at the Times and Post would continue to work hard regardless of the president's acknowledgment.

He said: "Pretending to ignore the work of a free press won't make the news go away or stop reporters from informing the public and holding those in power accountable."