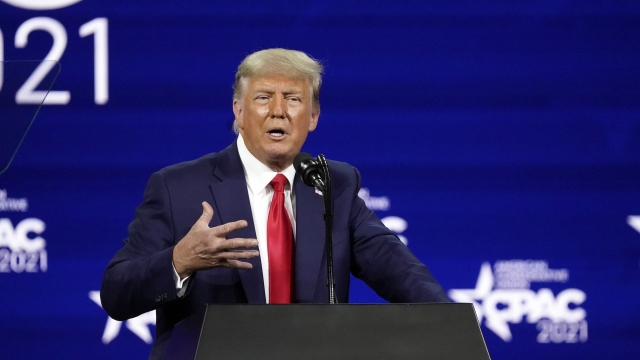 In a first since he left office, former President Donald Trump spoke before a crowd of supporters at the annual CPAC conference in Orlando, Florida.

"Who knows, I may even decide to beat them for a third time, OK?" Trump said.

Stopping short of outright declaring his candidacy for another presidential run in 2024, Trump used the event to air grievances about his 2020 election loss repeating a false claim that he won the election.

"We have the Republican party, it's going to unite and be stronger than ever before I am not starting a new party," Trump said.

It's a meeting that typically draws crowds of conservatives and presidential hopefuls.  But this year, those potential candidates are under the shadow of the former president.

"And they want him to go away, let me tell you this right now, Donald J. Trump ain't going anywhere," said Sen. Ted Cruz.

Despite his party losing control of the White House, the U.S. Senate and the House of Representatives remaining in Democratic hands, Trump won 55 percent of the support in a straw poll at the conference... Making him the preferred choice for 2024 ahead of Florida Governor Ron DeSantis and South Dakota Governor Kristy Noem.

After a historic second impeachment, some in the party believe the GOP should move on from Donald Trump.

"If we idolize one person we lose," said Sen. Bill Cassidy.

But others say despite Trump’s polarizing personality, his policies remain popular with the Republican base.

"He's got an opportunity to come back again if he wants to and there are going to be some in the party who want him and some in the party who don't," said former New Jersey governor Chris Christie. "But what is consistent is many of the policies that were pursued over the last four years, take aside the personality take aside the tweets, a lot of those policies are things that Republicans support."

If Trump does decide to run, he could face an intense primary with other White House hopefuls but as a former president, he has a bigger platform than most —one that he plans to use to amplify and endorse Republican candidates.

"We will take back the house, we will win the senate and then a Republican president will make a triumphant return to the White House and I wonder who that will be," Trump said.