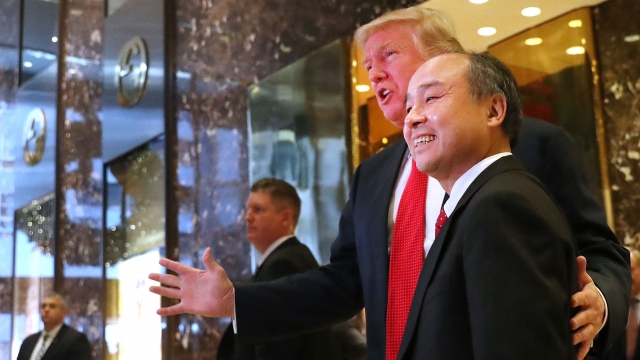 Donald Trump rarely walks his guests down to the lobby after meeting with them. But on Tuesday, the president-elect made sure to give this CEO a personal send-off.

"This is Masa of SoftBank from Japan, and he's just agreed to invest $50 billion in the United States and 50,000 jobs," Trump said.

After meeting with SoftBank CEO Masayoshi Son, Trump tweeted about the corporation's plans, saying, "Masa said he would never do this had we (Trump) not won the election!"

However, various reports say the deal is likely part of a $100 billion technology investment fund SoftBank and the Saudi Arabian government announced before the election. SoftBank is a telecommunications and internet corporation.

The president-elect seemingly wanted his guest to talk to the press, but we didn't get much more information on the very large commitment.

"We invest into the new startup companies in the United States," Son told reporters gathered in the Trump Tower lobby.

According to a handout Son showed reporters, the plan is spread over the next four years.

The handout also has the logo of Foxconn, an iPhone manufacturer. The handout says "+$7bn in US" and "+50k new jobs in US" under the Foxconn logo and next to the investment and job creation commitments Son discussed. But Foxconn's role in the deal — if any — hasn't been confirmed.

Son had told reporters he wanted to "celebrate" Trump's new job by making the commitment.

"He would do a lot of deregulation. I said, 'This is great. U.S. will become great again,'" Son said.

The meeting and commitment could be Son and SoftBank's way of getting Trump's help in another deal. Son has wanted T-Mobile and Sprint to merge but has had no such luck under the Obama administration.