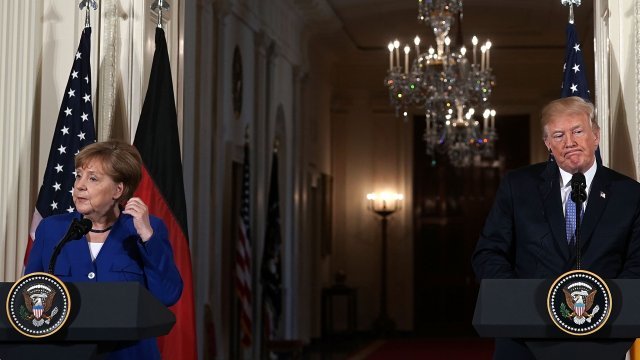 A few days ago, French President Emmanuel Macron made his first state visit to President Donald Trump's White House. The mood between the leaders was visibly friendly, but today the atmosphere in the East Room was a little different.

That’s because this time, it was German Chancellor Angela Merkel visiting the president. It was her second trip to Trump's Washington, and she didn't quite get the red carpet treatment Macron did. But her mission was similar to his: to secure a solid commitment from Trump on the Iran deal and the looming steel tariffs.

While both Trump and Merkel were critical of Iran, there's still not a consensus on the future of the nuclear deal.

"In our meetings today, the chancellor and I discussed Iran," Trump said. "The Iranian regime fuels violence, bloodshed and chaos all across the Middle East. We must ensure that this murderous regime does not even get close to a nuclear weapon and that Iran ends its proliferation of dangerous missiles and its support for terrorism."

Merkel acknowledged she doesn't think the deal is sufficient but said she does believe it's the first step in slowing down Iran's capabilities.

Neither leader gave many details about a possible trade war — Trump wouldn't say if he'll impose tariffs on Germany and other EU nations, and Merkel didn't sound confident in her attempts to convince him not to.

"The president will decide, that's clear," Merkel said. "We spoke about the state of negotiations and our respective assessments. The decision lies with the president."