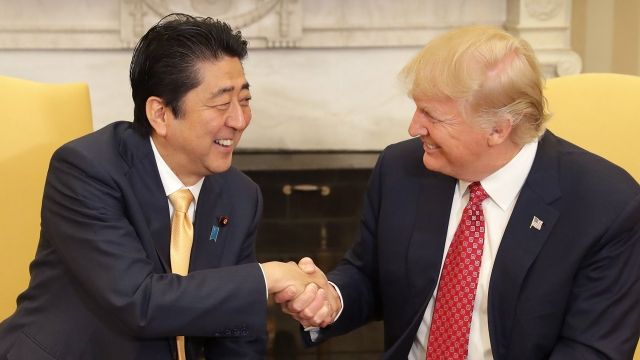 While hosting Japanese Prime Minister Shinzo Abe at the White House on Friday, President Trump made sure to underline the importance of the alliance between the U.S. and Japan.

Trump told reporters, "We are committed to the security of Japan and all areas under its administrative control. ... It is important that both Japan and the United States continue to invest very heavily in the alliance."

The "administrative control" line is probably a reference to Japan's territorial spat with China over who owns a string of islands in the East China Sea.

Trump's Secretary of State Rex Tillerson has pledged to take a tough stance against China in similar disputes.

During a campaign rally, Trump brought up a critic who apparently said, "'Donald Trump doesn't realize that Japan pays us 50 percent of the cost of defending them.' I said, why aren't they paying us 100 percent, right?"

Trump frequently questioned the value of the U.S.'s defense spending on Japan during the campaign. He's reversed that rhetoric since taking office.

For his part, Abe emphasized Japan's commitment to investing in U.S. infrastructure projects. Abe and Trump now head to Trump's Mar-a-Lago resort in Florida for the weekend.