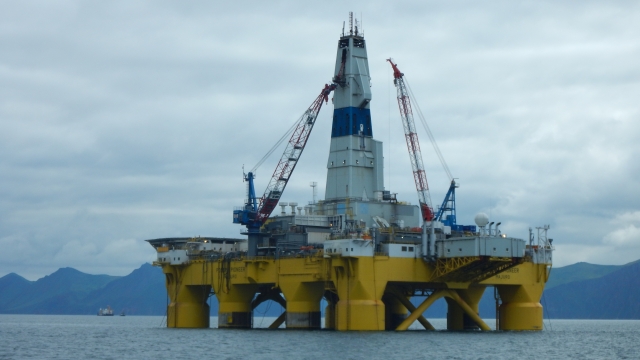 By Katherine Biek
April 28, 2017
The order could roll back some of former President Obama's attempts to ban offshore oil and gas drilling along parts of the Outer Continental Shelf.
SHOW TRANSCRIPT

President Donald Trump signed an executive order Friday that could lead to an increase in offshore oil and gas drilling.

Those banned waters make up most of the Outer Continental Shelf — the waters that neighbor U.S. land. Interior officials believe they contain 90 billion barrels of undiscovered oil and 327 trillion cubic feet of undiscovered gas.

The order is also designed to reverse a ban President Barack Obama implemented in December to block new offshore drilling leases in the majority of U.S. waters in the Arctic Ocean and some of the Atlantic Ocean.

The executive order also requires the Commerce Department to review all marine monuments and sanctuaries designated within the past decade.

That means looking at the Papahānaumokuākea Marine National Monument, which is the largest conservation area on Earth. It covers more than 582,000 square miles of sea and land off the coast of Hawaii.

Earlier this week, Trump signed an executive order to review 21 years worth of national monument designations.

If any of those monument designations were to one day be resized or rescinded completely, that federal land could be opened up to energy production.