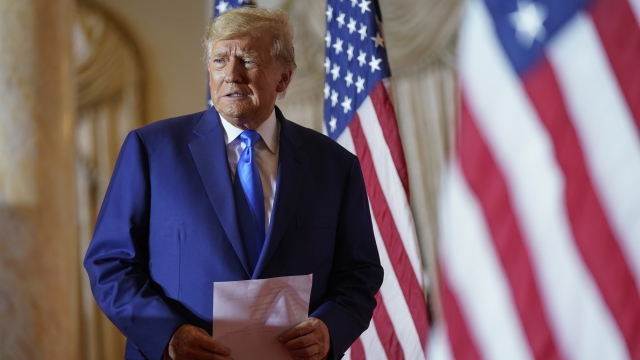 The announcement comes just a week after an underwhelming midterm showing for Republicans.

Former President Donald Trump said Tuesday that he will mount a third White House campaign, launching an early start to the 2024 contest. The announcement comes just a week after an underwhelming midterm showing for Republicans and will force the party to decide whether to embrace a candidate whose refusal to accept defeat in 2020 pushed American democracy to the brink.

“I am tonight announcing my candidacy for president of the United States,” Trump said to an audience of several hundred supporters, club members and gathered press in a chandeliered ballroom at his Mar-a-Lago club, where he stood flanked by more than 30 American flags and banners that read, “MAKE AMERICA GREAT AGAIN!”

In the lawsuit, Trump's lawyers say the subpoena was an infringement of the former president's First Amendment rights.

Trump enters the race in a moment of political vulnerability. He hoped to launch his campaign in the wake of resounding GOP midterm victories, fueled by candidates he elevated during this year’s primaries. Instead, many of those candidates lost, allowing Democrats to keep the Senate and leaving the GOP with a path to only a bare majority in the House.

Far from the undisputed leader of the party, Trump is now facing criticism from some of his own allies, who say it’s time for Republicans to look to the future, with Florida Gov. Ron DeSantis emerging as an early favorite White House contender.

Another campaign is a remarkable turn for any former president, much less one who made history as the first to be impeached twice and whose term ended with his supporters violently storming the U.S. Capitol in a deadly bid to halt the peaceful transition of power on Jan. 6, 2021. Just one president in U.S. history has been elected to two nonconsecutive terms: Grover Cleveland in 1884 and 1892.

Trump is also facing a series of intensifying criminal investigations, including a Justice Department probe into the hundreds of documents with classified markings that were discovered in boxes and drawers at his Mar-a-Lago club.

Aides and allies had urged Trump to wait until after the midterms were over — and then until after a Dec. 6 Senate runoff Andrew Harnik in Georgia — to announce his plans. But Trump, eager to return to the spotlight, is also hoping to stave off a long list of potential challengers, including Florida Gov. Ron DeSantis, who cruised to reelection last week and is now being urged by many in his party to run for president a well.

Trump has already begun to lash out at DeSantis publicly and on Tuesday, the Florida governor responded, dismissing the criticism as “noise."

“At the end of the day, I would just tell people to go check out the scoreboard from last Tuesday night,” DeSantis told reporters.

However, Trump has received the brunt of criticism for elevating candidates in states like Pennsylvania and Arizona who were unappealing to general election voters because they embraced his lies about the 2020 election or held hard-line views on issues like abortion that were out of step with the mainstream.