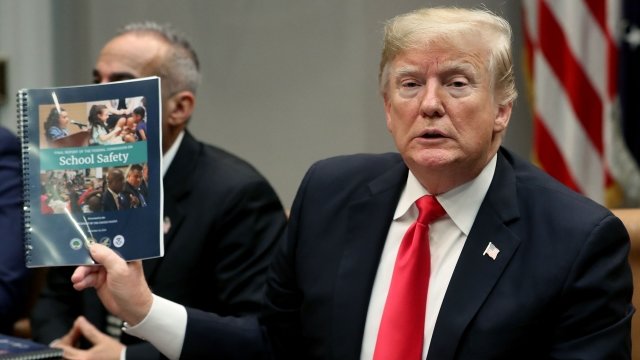 By Christian Bryant
December 18, 2018
The panel was created after the Parkland shooting sparked calls for gun control. But that issue was notably absent from the panel's recommendations.
SHOW TRANSCRIPT

After nine months of visiting schools and meeting with survivors, the commission, led by Education Secretary Betsy DeVos, has released its recommendations — noticeably avoiding gun control.

Instead, it recommends getting rid of Obama-era guidelines on school discipline meant to prevent minority students from being disciplined more harshly and at higher rates than white students.

The Obama guidance from 2014 points to federal data that found black students are three times more likely to be suspended or expelled than white students. Research has linked excessive school disciplinary action to higher likelihood of entering prison, a phenomenon known as the “school-to-prison pipeline.”

According to the Department of Education, black girls are suspended at a higher rate "than girls of any other race or ethnicity and most boys." And in some cases, those suspensions were doled out for subjective misconduct, like inappropriate dress.

And we've seen examples of even harsher punishments for girls in schools across the country.

The commission’s decision to rescind disciplinary guidelines for minority students — while most of the deadliest school shootings have been committed by white students — has angered advocates on two fronts: civil rights and gun control.

Senator Patty Murray, the Democrat on the Senate committee overseeing education said: “Despite overwhelming evidence and basic common sense, Secretary DeVos is trying to make the case that it’s not weapons of war in schools that make students unsafe, but rather the true danger is schools’ attempts to fight racism and inappropriate discipline.”

But the commission’s report says the 2014 guidance "undercut the ability of local officials to address the impact of disciplinary matters on school safety." The report includes testimonies from educators to illustrate their point:

"Policymakers have made it so we have no authority. Only perceived authority. Only as much power as you get your kids to believe. Once the kid finds out he can say ‘F*** you,’ flip over a table, and he won’t get suspended, that’s that."

The commission's lone recommendation related to guns was for states to pass "extreme risk protection orders," which would temporarily restrict access to firearms for people who might pose harm to themselves or others.