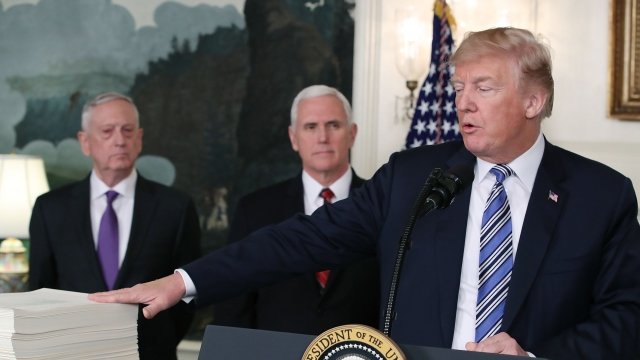 SMS
Trump Says The US Has A $500B Trade Deficit With China. It Doesn't.
By James Packard
By James Packard
March 27, 2018
President Donald Trump says the U.S. lost $500 billion in trade with China last year. That's off by billions.
SHOW TRANSCRIPT

President Donald Trump is talking a lot about trade of late, namely trade with China. Just a few days ago, while talking with reporters at the White House, Trump said this:

"Last year we lost $500 billion on trade with China. We can't let that happen."

But we didn't. We lost about $336 billion. That's still a lot of money, but the president is off the mark by about $164 billion.

The president's argument, though, is that the U.S. runs a big trade deficit with China, and he has a point — when it comes to goods, at least. The U.S. actually has a trade surplus in services with China of about $38.5 billion.