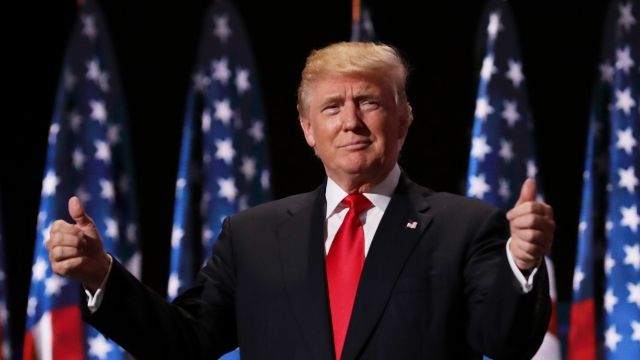 SMS
Trump Says He Doesn't Really Need Daily Intelligence Briefings
By Ethan Weston
By Ethan Weston
December 11, 2016
Trump has been getting a lot of flak for not getting daily intelligence briefings, but he says they're not necessary.
SHOW TRANSCRIPT

President-elect Donald Trump has gotten a lot of criticism for reports that he is skipping daily intelligence briefings. And on Sunday, Fox New's Chris Wallace asked him about it point-blank.

"You know I'm, like, a smart person. I don't have to be told the same thing in the same words every single day," Trump said.

Trump told Wallace he gets the briefings but only when he needs them. He also said his generals and Vice President-elect Mike Pence are getting briefings more often.

If you're wondering what kind of briefings Trump is allegedly skipping, they include top secret information related to espionage, covert operations and other national security issues.

Of course, each president has had different ways of receiving intelligence briefings. President Barack Obama likes to read his, while former President George W. Bush had his in-person.

Trump and Pence now have access to the same intelligence information that President Obama receives daily. But Trump has reportedly been receiving briefings only once a week, on average.

Some speculate that Trump just doesn't trust the intelligence community. Most recently, he's been dismissive of reports from the CIA that Russia tried to influence the 2016 presidential election.

Trump told Wallace during his Sunday interview, "I think it's ridiculous. I think it's just another excuse."

But a former CIA officer told Politico that Trump's briefing habits are a bad metric to judge him by. It might be more important to make sure his closest allies — like Pence — pass him the information.