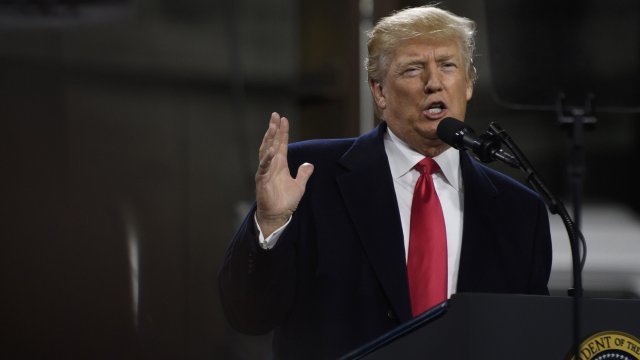 He seemed to go against the GOP plan to include the Children's Health Insurance Program in a stop-gap spending measure.

A tweet from President Donald Trump is adding confusion to an increasingly unclear government funding situation.

Trump tweeted Thursday morning, "CHIP should be part of a long term solution, not a 30 Day, or short term, extension!"

Let's back up. The "short-term extension" Trump is referring to is the Republican-led effort to fund the federal government until Feb. 16. Without a funding deal, the government will shut down Friday.

Democrats have opposed any funding bill that doesn't include protections for some immigrants, but Republicans are hoping to attract Democratic support by attaching funding for the Children's Health Insurance Program, or CHIP, to the bill. And Trump's tweet seems to work against the GOP strategy.

The White House issued a statement trying to clarify the confusion, saying, "The President supports the continuing resolution introduced in the House."

Republicans need at least nine Senate Democrats to pass the spending bill without a filibuster, but it still isn't clear if they can get the votes.

Virginia Sens. Mark Warner and Tim Kaine — whom Democrats had considered possible "yes" votes, according to The New York Times — put out a statement Thursday saying they oppose the current resolution.