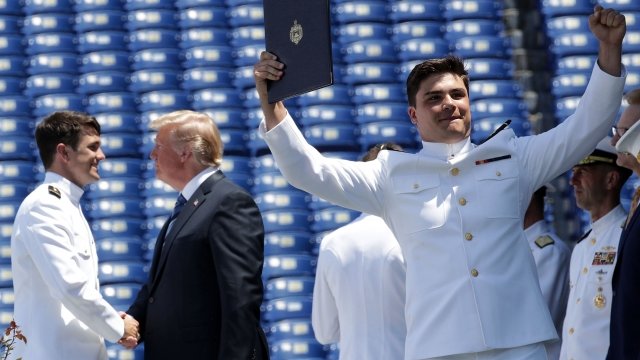 SMS
Trump's Naval Academy Commencement Address Needs A Fact Check
By James Packard
By James Packard
June 1, 2018
He said the military was getting a "big" pay raise for the first time in 10 years and that new ships were coming "soon". Neither is true.
SHOW TRANSCRIPT

President Donald Trump gave the commencement address at the United States Naval Academy late last month, and during his 35-minute speech, he made a few claims that require a fact check. First, pay raises for the military.

Trump also said: "We are rebuilding our defense industrial base to forge American iron, aluminum and steel — which, by the way, we just put tariffs on when it comes in from other countries. We're taking in a lot of money now, our country. They pay that big beautiful tariff, it goes right into rebuilding new ships."

The money from tariffs goes to the National Treasury, and from there Congress and the president together decide how to spend it.

"We have now the lowest number of ships that we've had since World War I," Trump said. He promised: "Very soon you are going to get to 355 beautiful ships, 355. That's almost a couple of hundred more ships. So you will be around for a long time."