This Pa. Town Is An Unlikely Front In The U.S.-China Trade War 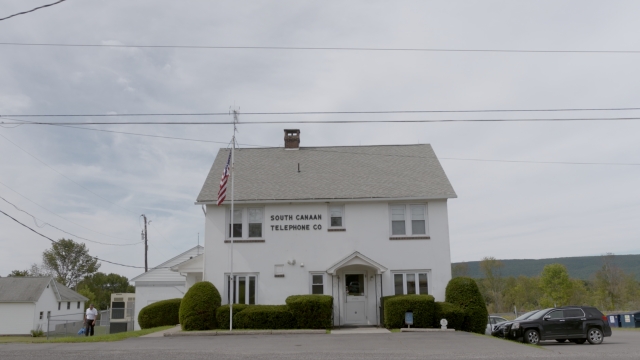 SMS
This Pa. Town Is An Unlikely Front In The U.S.-China Trade War
By Matt Picht
By Matt Picht
September 12, 2019
The White House's push to go after Chinese telecom firm Huawei could endanger broadband access in this small town in Pennsylvania.
SHOW TRANSCRIPT

It took nearly five years of work for this small Pennsylvania town to get high-speed internet. Now, all that work is in jeopardy of being undone after the Trump administration threatened to go after a Chinese telecom firm.

LHTC Broadband is one of the few cable providers that cover South Canaan, Pennsylvania — located just over 20 miles from Scranton. The company's CEO, Jim Kail, told Newsy he shopped around and ended up buying broadband equipment for the area from Chinese telecom firm Huawei, whose prices and reliable service have made it an attractive option for small businesses.

Kail told Newsy, "The product is very competitively priced. And we decided to give it a shot in this new location. Now we're caught into this, as you know, this trade war, whatever's happening there."

Now Huawei is facing a crackdown from the Trump administration.

In particular, the FCC has proposed barring companies that do business with Huawei from accessing the Universal Service Fund — a crucial source of federal funding for rural broadband initiatives.

The Trump administration has accused Huawei of providing the Chinese government with a potential backdoor into the U.S. networks that use its technology. Huawei has denied the accusations.

Companies that want to keep receiving funds from the FCC could be forced to cut ties with Huawei — that means no tech support or equipment upgrades. The government might even require a "rip and replace" solution — tearing out the existing Huawei technology and starting from scratch. That could end up costing Kail $500,000 just on replacement equipment alone.

Kail told Newsy he considered the security concerns back when he chose Huawei as the provider for South Canaan. He's not convinced these latest actions against the company are entirely based in national security.

That spells trouble for customers in Pennsylvania that rely on Huawei tech for their internet.

And LHTC is far from the only company doing business with Huawei. The Rural Wireless Association estimates about 25 percent of its membership relies on Huawei tech to provide for their customers.

And any disruption in broadband services could have run-on effects for the local community.

He told Newsy, "Those things that the entire rest of the world, that the urban areas have, and have at their fingertips and is useful to them in the day to day, we wouldn't have without broadband. Other countries where they have it and it's treated more like a utility, they're already well past it. And we're still struggling just to get the basics."