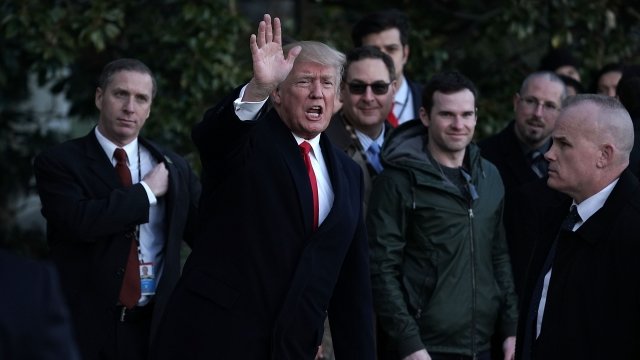 A senior White House official told CNN it wouldn't look good if Trump was at his Mar-a-Lago resort during a government shutdown.

President Donald Trump is reportedly delaying his weekend trip to Florida until lawmakers pass a spending bill to keep the government open.

Trump was originally scheduled to leave Washington, D.C., Friday afternoon. But a senior White House official told CNN it wouldn't look good if Trump was at his Mar-a-Lago resort during a government shutdown.

Here's where Congress is at on that spending bill: The House passed a short-term measure Thursday night, so now all eyes are on the Senate, where things aren't looking good.

Senate Republicans need 60 votes to pass the bill, meaning they need to get some Democrats to vote in favor of it.

The process of appropriating government funds is often about compromise.

But Democrats are holding out for a deal that addresses the Deferred Action for Childhood Arrivals program, better known as DACA. It's set to expire in March. Lawmakers are also pushing for concessions on disaster aid for Puerto Rico and opioid treatment funding.

If the short-term spending legislation does advance in the Senate, it will fund the government through Feb. 16.

If it doesn't pass, the federal government will shut down at midnight Friday. During the last government shutdown in 2013 — which lasted 16 days — as many as 850,000 federal employees were furloughed per day.