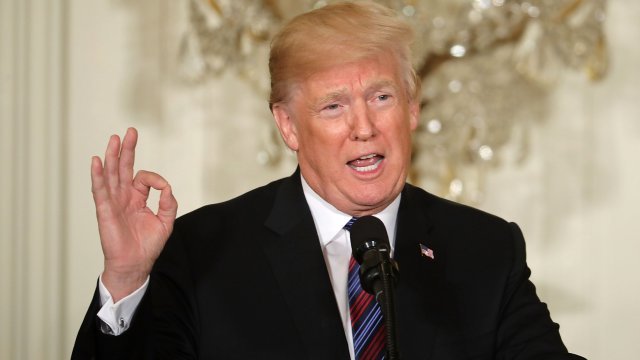 Despite the president's personal misgivings, the White House has taken increasingly harsh action against Russia.

The Trump White House is taking an increasingly hardline stance against Russia's current foreign policy. But President Donald Trump doesn't seem to be entirely on board.

Case in point: the recent economic sanctions U.S. Ambassador to the U.N. Nikki Haley said would punish Russia's support for the Syrian government. Those sanctions are now suspended indefinitely because Trump reportedly had some concerns.

Haley has clashed with her Russian counterpart over Syria several times: She recently said Russia's "hands are covered in the blood of Syrian children." Trump has also called out Russia, but he tends to sound more hopeful about the prospect of working together.

"Russia must decide whether it will continue down this dark path, or whether it will join with civilized nations as a force for stability and peace," Trump said during his announcement of airstrikes against the Syrian government. "Hopefully, someday we'll get along with Russia and maybe even Iran, but maybe not."

Only three countries in the U.N. Security Council voted in favor of a Russian-drafted resolution condemning the missile strikes in Syria.

Trump's optimism likely stems from the personal rapport he's built with Russian President Vladimir Putin, whom he recently invited to the White House. The Wall Street Journal notes Trump may be trying to preserve that relationship to win concessions from Putin later on.

But Trump's personal feelings haven't stopped the White House from cracking down on Russia. His administration has implemented congressionally mandated sanctions against the country, kicked out Russian diplomats and inked an arms deal to help Ukraine fend off Russian aggression.

Russian lawmakers had prepared their own round of economic measures to hit back at the prospective U.S. sanctions. Now that those sanctions are in limbo, so is the Russian response.