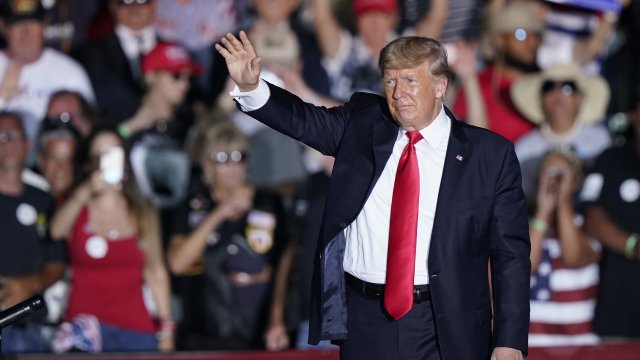 "My fellow Americans, our movement is far from over. In fact, our fight has only just begun."

Former President Trump's return to the rally stage Saturday rung a familiar tone... his first campaign-style event since leaving office... resurfacing baseless claims of fraud and what he calls "the crime of the century."

The event held not far from Cleveland was in support of former White House aide Max Miller, who is hoping to take a congressional seat from Representative Anthony Gonzalez.

Gonzalez was one of the 10 Republican House members who voted to impeach Trump for his role in the January 6 Capitol insurrection — nine of them facing primary challengers with Trump's support.

But instead of focusing on efforts to push supporters to the polls, Trump fixated on his lost election... again claiming without proof that the election was "rigged" and still saying "we won... in a landslide."

This.. even after dozens of officials, including some in his own court, have reported no evidence to support his claims of mass voter fraud. His camp is closely watching an audit in Arizona, which they believe will turn up evidence... though officials there have repeatedly said their election was free of issues.

Still, supporters, including MyPillow founder Mike Lindell and Rep. Marjorie Taylor Greene, are backing the former president as he embarks on a series of appearances.

But at least one Republican is rolling his eyes....Sen. Mitt Romney on CNN Sunday comparing the event to the World Wrestling Federation.

"It's entertaining, but it's not real. I think people recognize it's a lot of show and bombast but it's going nowhere. The election is over. It was fair."

Trump's next stop is Sarasota, Florida for another rally July 3. Then he's headed to the southern border to protest President Biden's immigration policies.