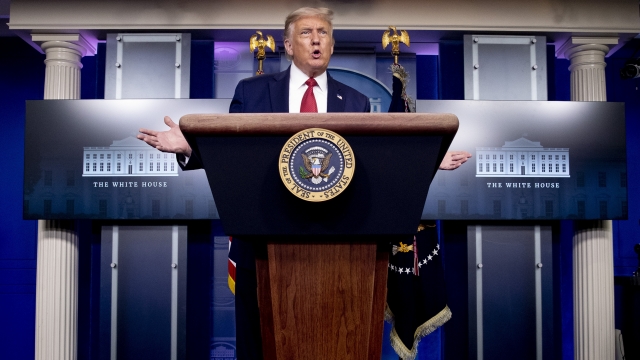 SMS
Trump Escorted Out Of Briefing Following Shooting Near White House
By Katherine Biek
By Katherine Biek
August 11, 2020
The Secret Service says an officer shot a 51-year-old man who said he was armed outside the White House. The suspect had charged at the officer.
SHOW TRANSCRIPT

President Donald Trump was abruptly pulled out of Monday's coronavirus task force briefing following a shooting near the White House.

Secret Service Agent: "Sir, you need to step outside."

Secret Service Agent: "Sir, you need to step outside."

The president returned to the briefing room minutes later, saying the situation was "under control."

President Trump: "I'd like to thank the Secret Service for doing their always quick and effective work. But there was an actual shooting and somebody has been taken to the hospital."

The Secret Service later said in a statement that a 51-year-old man had approached one of its officers posted along the White House's perimeter and told the officer he was carrying a weapon.

The Secret Service said the suspect then 'ran aggressively" toward the officer, pulled out an object and "then crouched into a shooter's stance as if about to fire a weapon." The officer responded by firing at the suspect, hitting him in the torso.

The Secret Service said both the suspect and the officer were transported to local hospitals, but it did not give any update on their conditions.

It also confirmed that the White House was never breached during the incident and that no one inside was ever in danger.