Trump Pledges To Personally Give $1 Million Toward Harvey Efforts 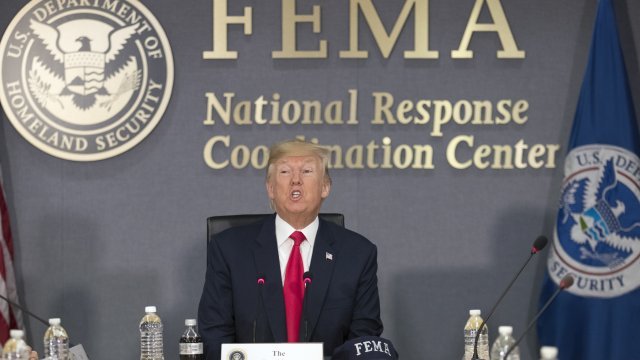 SMS
Trump Pledges To Personally Give $1 Million Toward Harvey Efforts

By Gabrielle Ware
August 31, 2017
This may be one of his biggest personal donations, but it's hard to tell.
SHOW TRANSCRIPT

President Donald Trump has pledged to give $1 million of his personal funds to help with Hurricane Harvey recovery.

White House press secretary Sarah Huckabee Sanders told reporters the donation would come from Trump personally, which presumably means this won't be a donation from the Trump Organization or his charity, the Trump Foundation.

This might be one of Trump's biggest personal donations on the record yet — but it's hard to know for sure.

Trump has previously claimed to have given millions to charity in the past, but there's not a lot of hard evidence to back that up. Trump's tax returns would list his charitable donations, but he hasn't released them.

But the Harvey donation rivals another on-the-books Trump donation: During his presidential run in 2016, he gave $1 million to the Marine Corps-Law Enforcement Foundation.

Trump announced the donation in January, but he didn't actually donate the money until months later after reporters hounded him about its whereabouts.

This time, Trump is getting the reporters on board from the start: Sanders asked the White House press corps for suggestions on which charities Trump should support to help victims of Harvey.