Where We Will — And Won't — See Trump This Campaign Season 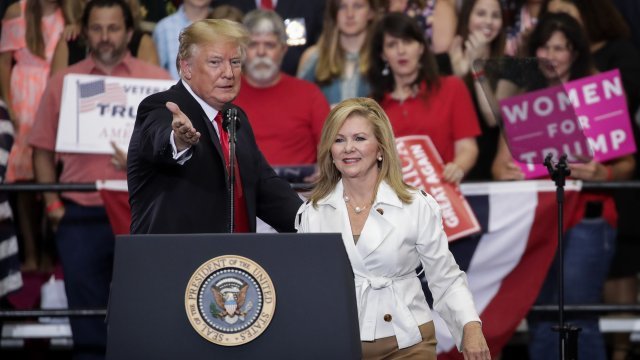 SMS
Where We Will — And Won't — See Trump This Campaign Season

By Andrew Rafferty
September 20, 2018
Aides say President Trump will be the most active campaigner in recent presidential history this midterm election.
SHOW TRANSCRIPT

Midterm voters are going to see a lot of President Donald Trump this fall.

White House advisers say Trump is planning an aggressive campaign schedule that, when it's all said and done, will have him on the road for at least 40 days.

That schedule would outpace what George W. Bush and Barack Obama did heading into both midterms of their presidencies, according to Trump's political team.

And where we will and won't see the president can tell us a lot about the battle for control of Congress and Trump's popularity among certain parts of the electorate.

So far in September, the president has either traveled or scheduled trips to Montana, North and South Dakota, Nevada, and Missouri. Another planned trip to Mississippi was canceled so the president could monitor Hurricane Florence.

The travel is overwhelmingly focused on places Trump won comfortably in 2016 that have tight Senate races. And here's a big reason why: While Trump's approval rating remains firmly under water, he is still very popular among Republicans.

"I think you'll see him in mostly red states and, frankly, staying away from the coasts, where you see a lot of Republican House members in swing districts where he definitely does more harm than good,” said Republican strategist Alex Conant.

That's what made Trump's endorsements so powerful during the primary season: His support holds a lot of weight for GOP voters. But the president's thumbs-up may have less pull once primaries are over.

"Republicans really like him. That's why his endorsements are effective and important in primaries. Less so in the general election, when you have lots of swing voters and Democrats who can't wait to vote against him,” Conant said.

And on top of all that, midterms generally do not favor the president.

That's especially true when a president's approval rating is below 50 percent, where Trump's currently sits and where Obama's was when Democrats lost 63 seats in 2010.