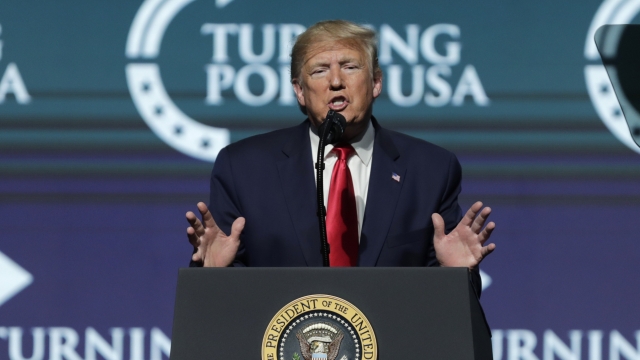 SMS
Trump, Pence Lean Into Evangelical Voter Bloc Ahead Of 2020
By Amber Strong
By Amber Strong
June 24, 2020
In one day, the VP kicked off his Faith in America tour and the president delivered a speech at a Phoenix megachurch.
SHOW TRANSCRIPT

“Trump's White evangelical share was consistently around 70% through through April and May. But then in the first week of June, it dropped 10 points,” said Burge.

A separate survey also shows the president’s favorability among White evangelicals slipping from 66% in April to 62% in May. He also went down among White Catholics, from 48% to 37%.

So why the dip in polling? Experts say in some polls the president's handling of the coronavirus may have had a negative effect, but Religion in Public co-founder Ryan Burge points to something else.

“There was an interesting incident where President Trump had a group of peaceful protesters push back from Lafayette Park and then St. John's Church, which is right across the White House so he could get a basically a photo opportunity of holding a Bible in front of the church. And I think that that incident, tied in with all the racial injustice and police brutality and the protests, really drug Trump's numbers down with White evangelicals,” predicted Burge.

White evangelical voters have consistently been loyal to President Trump, with nearly 80% voting for him in 2016.

It isn’t necessarily due to the president’s piety. According to a Morning Consult poll released this month, a majority of evangelical Christians and Catholics don’t believe the president is religious.

Jack Jenkins, an author and reporter for Religion News Service, describes the relationship as transactional.

“We've heard evangelicals say, you know, God uses imperfect vessels, the idea being that Trump wouldn't be doing something for God. And what is often said, the next breath is, you know, we're going to get conservative judges on the Supreme Court,” said Jenkins.

We asked the Trump campaign if it was concerned about a loss of evangelical voters. It replied in part: “President Trump’s exemplary record on faith issues speaks for itself. He has appointed 200 strong, conservative federal judges.”

An analysis from the Washington Post shows a quarter of circuit judges are now Trump appointees.

President Trump's supporters say the judges are important, especially if they interpret law with an evangelical perspective.

“These are generational changes. And so we've got to think, it's not just a vote for the man, or it's not just if we're favorable or not to him. It's a question of what's our worldview? And and what kind of philosophy do we want all these other people, including these judges, to have going forward for our children and grandchildren?” explained Father Frank Pavone, an adviser for Catholics for Trump.

In recent weeks, the administration has gone to lengths to remind evangelical voters of this fact, wIth the vice president launching a Faith in America tour.

“The silent majority can be silent no more,” said Pence.

While the president addressed a group of young people at an Arizona megachurch.

“We will defend our values, our voices, our faith,” said President Trump.

Along the way, leaning into a law-and-order style of politics when it comes to protests.

“The truth is, there has been a strain of American Christianity that said, 'You know what, like, there are instances in which violence is OK and in which death is OK.' Sometimes that's articulated in sort of 'just war theology', where we're talking about armies facing armies. And sometimes we're talking about self-defense,” explained Jenkins.

The question is, will the message prevail with enough White evangelicals and Catholics? Burge says Catholics in particular helped ensure a victory for President Trump in certain battleground states.