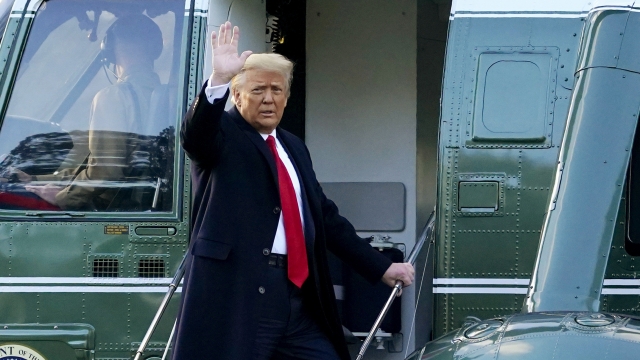 Former President Trump will address some of the Republican Party's most influential donors this weekend at a time when some are uneasy over the tight grip Trump continues to have over the party.

"I think a lot of people, myself included, are thinking about the future of the Republican Party. Does that include Trump or does it not?" said GOP donor Dan Eberhart.

Dan Eberhart has donated thousands of dollars to Republicans and Trump's campaign. This year he won't be attending the RNC's retreat in Palm Beach, Florida -- part of which will be hosted at Trump's Mar-a-Lago resort. But he has heard from others planning to attend who say they're most concerned about the 2022 midterms.

"If I'm Mitch McConnell or Kevin McCarthy, I'm extremely worried about Trump interjecting himself in these primaries and potentially costing us control in the House or controlling the Senate in November [2022]," Eberhart said.

The retreat comes about one month after the former president attempted to get the RNC to stop using his name in fundraising -- instead telling donors to send money to his Save America PAC.

"He still is somebody who has who is very highly regarded, who a lot of Republican voters have a positive impression of," said Lanhee Chen. "And as a result, his role in politics continues to be a significant one."

Even without his social media accounts, Trump has been able to control the conversation and sway news coverage with interviews, official statements and endorsements of loyal allies.

"I will be actively working to elect strong tough and smart Republican leaders," Trump said.

Those close to Trump did not respond to interview requests for this story. But there have been reports he is potentially creating a social media site which could have an even greater impact on messaging in the GOP.

"Not having access to those things I think certainly has been to his detriment," Chen said. "So it doesn't surprise me at all to hear and certainly this is consistent with what I'm hearing, [that] the former president is looking for ways to get back into social media again, have some kind of platform you can use to directly communicate with the American people."